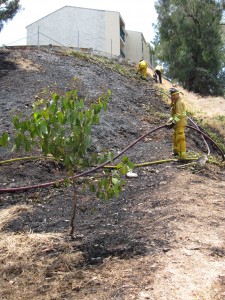 LA MESA–Heartland Fire and Rescue responded Sunday morning to a brush fire in the 7000 block of Saranac Street in La Mesa.

Heartland Fire Dispatch received multiple calls from residents stating “there was a fire on the hill behind their house.” Fire units arrived within 5 minutes to discover a small fire on a hillside, approximately ¼ acre in size, in light flashy fuels traveling at a slow rate of spread.

No structures or other property were immediately threatened. The flames were extinguished in approximately 10 minutes by two engine companies and one truck company.

Several witnesses noticed a person smoking in the area of the origin of the fire just moments before they noticed flames. Upon further investigation, a pack of matches and a discarded cigarette were found close to the origin of the fire. The person smoking the cigarette had fled the scene prior to fire and police department arrival. There were no injuries or damage to property.