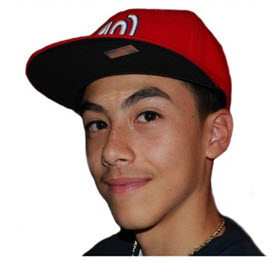 SAN DIEGO—Detectives continue to seek information in the unsolved murder of a college student two years ago today.

On July 29, 2011 at about 11:30 p.m., officers responded to a fight at an apartment complex located at 47th and Castana Streets. Police officers arrived and discovered 20-year-old Sonny Carrillo suffering from a stab wound. He was transported to a local trauma hospital for emergency treatment but died from his injuries.

Carrillo was a college student and employed at Frank’s Toyota in National City. His family is still devastated by his senseless murder.

One of the suspects in the murder has been identified as 23-year-old Julio Cesar Mendez. He fled the scene on foot shortly after the stabbing. His whereabouts are still unknown but he may be in Mexico. Police says Mendez is considered armed and dangerous.

Mendez is described at a Hispanic male about 5 foot, eight inches tall and weighed about 180 pounds at the time of the murder. He has the numbers “32” and a spider tattooed on the left side of his neck and blue lips tattooed on his left cheek. His left finger is also tattooed.

If anyone has information regarding this incident, contact the San Diego Police Department’s Homicide Unit (619) 531-2293. If you wish to remain anonymous, you can call the Crime Stoppers anonymous tip line at (888) 580-8477. You can also send anonymous email or text messages to Crime Stoppers by visiting http://www.sdcrimestoppers.com.