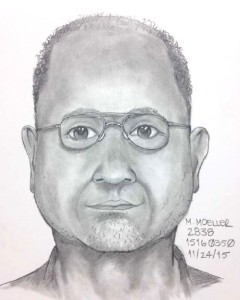 ALPINE–Crime Stoppers and investigators from the Alpine Sheriff’s Station are asking for assistance from the public to help identify and locate a man wanted for annoying a child.

Deputies say a 16 year-old girl was followed by a man driving an older model tan Toyota Camry or similar vehicle while she was walking near Alpine Boulevard and West Victoria Drive in Alpine.

On November 4, the man drove up to the girl and asked if she needed a ride to her car. When she ran away, the man circled the block several times to try and find her. On November 18, the girl told deputies she saw the man again as she was walking to school and he followed her to the bus stop. He never got out of the car. The girl was not able to get the license plate number of the car.

The girl describes the suspect as a heavy set, dark-skinned black man between 65 to 70 years-old. He was bald, but had a mustache and was wearing wire-rimmed glasses.

The man’s car is described as an older model tan Toyota Camry or similar type of vehicle.

Anonymous email and text messages can be sent via www.sdcrimestoppers.org.