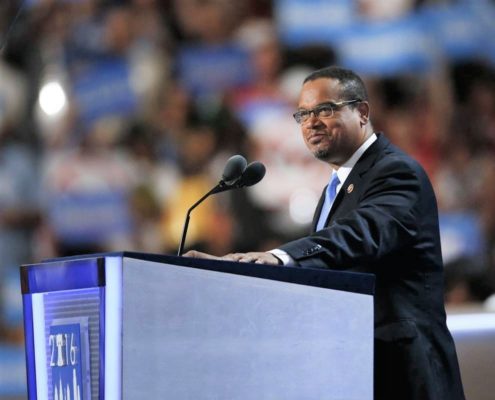 BALTIMORE – U.S. House of Representatives Democrats are convening in Baltimore, Maryland for a three day retreat, but the debates and discussions are centered on whether or not Hillary Clinton was the best standard bear to have led the Party in the 2016 presidential election.

Progressive and centrist Democrats are at odd over who is the blame for the breakdown of the traditional Democratic Party coalition of white women (non-college degree) and blue collar working whites who turned out and voted for Donald Trump in large numbers. It’s the first caucus to convene in years without a Democratic president to command policy from the powerful position as leader of the party and occupant in the White House. And it’s clear that lawmakers are struggling to coalesce around a single message or the best strategy for taking on the most controversial and unpredictable president in recent history.

The path House Democrats decide to choose will shape not just their electoral fortunes in 2018 but whether they can be at all relevant in the new Washington.

“The election was a setback in many respects,” House Minority Leader Nancy Pelosi told San Diego County News. “I think this is very reflective.”

The biggest divide within the caucus is whether to barricade in unison for the next four-year, and engage in confrontational and ideological battles with Donald Trump or stay on the current path of frequently annoying the president but holding out for cooperation where they can agree.

Democratic leaders say there’s more than enough fodder to highlight — Trump’s cozy relationship with Russia, the rocky rollout of his refugee ban and his propensity to engage in petty Twitter fights about crowd size and the media — without having to go full obstructionist, for now.

“We have to be careful not to overplay our hand and give the appearance that we will not cooperate on anything with this White House,” House Minority Whip Steny Hoyer (D-MD) said Wednesday.

But some members, many of whom have never been in the House majority and are facing potentially many years in the wilderness, are ready to take on the White House, head on. “We lost this election because the Democratic ‘Centrist Establishment’ insisted and forcefully wanted Hillary Clinton as the nominee at any cost, stated Rep. Keith Ellison (D-MN). “We would have been better off with Bernie Sanders as our nominee and we would have won.”

The caucus members are even seeing a little bit of that no nonsense and confrontational style reflected in the new caucus chairman. “What our caucus needs to know is that their leadership has backbone unlike that of the Republicans in the House and Senate,” said Joseph Crowley, a New Yorker who has been the most piercing Trump critic in House Democratic leadership; he’s
called the president a “weakling” and described him as a “puppet ruled by senior White House adviser Steve Bannon and Russian President Vladimir Putin.”

About 200 caucus members and their staff are huddled together in unison from the surface but there is plenty of resentment for the way the Democratic National Committee managed the 2016 election.

“It’s my sense … that Hillary Clinton’s failings were not her policy positions per se but the way she is viewed in society … and a campaign her people ran that was far more focused on disparaging Trump’s fitness for office than her own [policies],” explained Rep. Ruben Gallego (D-AZ), in a conversation with The San Diego County News. Gallego said he’s not looking to “get dragged down into the mud and to the triviality of Trump.” But, added, if the new president “wants to mix it up, we’ll go there too.”

That message is not what rank-and-file party leaders want to hear and discuss — many of whom strongly supported Clinton.

“We cannot work with this president,” Rep. Maxine Waters (D-CA.), who voted and supported Clinton, said of Trump. “I think at some point reality is going to hit leadership.”

Other House Democrats noted the Senate GOP’s wildly successful strategy of opposing Barack Obama at every turn. “That really hurt the Republicans,” Rep. Gerry Connolly (D-Va.) said with a sly smile. “This is going to be a target rich environment and we should take advantage of that.” Rep. Waters has even said Trump is “leading himself” into impeachment. But caucus leaders aren’t ready to go that far, at least not yet. While Pelosi has definitely become more aggressive in criticizing the president, she still leaves the door open to work with Trump down the road.

“We have that responsibility to the American people, to find our common ground,” Pelosi said during a CNN town hall recently.

Some Democrats are working quietly to set up meetings with the White House on areas where they might share common ground, like bringing down the cost of prescription drugs.

There might also be other ways to exact a little control on Capitol Hill without morphing into the “party of no.” There’s no denying that the House minority is the most marginalized group in Washington; at least Senate Democrats have the filibuster to scuttle legislation they oppose.

But House Democrats might yet find some leverage if Republicans fracture as they have so often in the past and House Speaker Paul Ryan (R-WI) must rely on Pelosi to deliver the votes at a crucial moment.

“When it comes down to it, [Republicans] have a difficulty putting together the votes to pass a lot of things, including the debt ceiling,” Pelosi said. “We’ll see what happens with legislation as it’s brought forward.

For now, the Democrat’s goal in the retreat appears to be to get on the same page, whatever that page turns out to be or how divisive the opinions regarding on what’s the best strategy going forward.