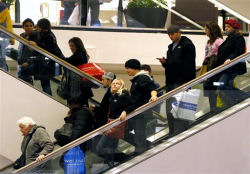 NEW YORK–(PRNewswire)–As one year draws to a close and another begins anew, it’s time for Americans to plan out the year to come. What financial resolutions might they be making? And what sort of economic changes do they expect 2014 to bring for the nation as a whole? A recent Harris Poll finds the pessimistic outlook that the economy will get worse (32%) slightly overshadowing the belief that it will improve (27%), though the most prevalent opinion is that the economy will stay the same (42%).

These are some of the results of The Harris Poll of 2,311 U.S. adults surveyed online between December 11 and 17, 2013 by Harris Interactive.

It is noteworthy that Americans are more likely than last year to believe the economy will stay the same (up 11 percentage points from December 2012), while drops are apparent both for the belief that the economy will improve (down 6 points) and that it will get worse (down 4 points).

Reflecting on 2013; Planning for 2014
Americans were asked about their financial plans for the year ahead, as well as what they planned on doing in 2013 – and whether or not they followed through on such plans.

Turning to the year ahead, nearly half of Americans (45%) say they expect to cut back on household spending in 2014, while four in ten each plan on paying down their level of debt and saving more (40% each). Nearly one-fourth (23%) plan on saving more for retirement and 15% each plan on getting rid of one or more credit cards and undertaking home improvements that increase the value of their home.

Financial plans for the coming year are similar to those seen a year ago, though there has been slight growth in planned saving, with stated intentions to save more in general and save more for retirement both up three percentage points.

Looking further back, Americans are considerably less likely than five years ago (the first year this question was asked) to say they plan to cut back on spending in the year ahead (down 10 points) and to get rid of one or more credit cards (down 9 percentage points).

Renewed dedication of self delusion?
Americans who tried and failed to make financial changes in 2013 appear to be doubling down, so to speak, with those who intended a change in 2013 but didn’t follow through consistently more likely than the general population to say they expect to make such a change in 2014. Top examples include:

This Harris Poll was conducted online within the United States between December 11 and 17, 2013 among 2,311 adults (aged 18 and over). Figures for age, sex, race/ethnicity, education, region and household income were weighted where necessary to bring them into line with their actual proportions in the population. Propensity score weighting was also used to adjust for respondents’ propensity to be online.

All sample surveys and polls, whether or not they use probability sampling, are subject to multiple sources of error which are most often not possible to quantify or estimate, including sampling error, coverage error, error associated with nonresponse, error associated with question wording and response options, and post-survey weighting and adjustments. Therefore, Harris Interactive avoids the words “margin of error” as they are misleading. All that can be calculated are different possible sampling errors with different probabilities for pure, unweighted, random samples with 100% response rates. These are only theoretical because no published polls come close to this ideal.

Respondents for this survey were selected from among those who have agreed to participate in Harris Interactive surveys. The data have been weighted to reflect the composition of the adult population. Because the sample is based on those who agreed to participate in the Harris Interactive panel, no estimates of theoretical sampling error can be calculated.