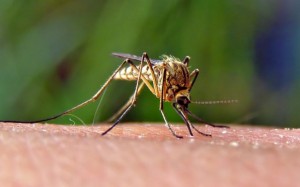 SAN DIEGO–Two more dead birds have tested positive for West Nile virus, prompting County officials to remind people to protect themselves from mosquitoes that can carry the potentially-deadly disease even as fall seemed to be bringing cooler temperatures.

“We think of West Nile virus as a warm-weather disease and we are starting to see cooler days and nights, but finding these birds should remind everyone to be careful,” County Environmental Health Director Jack Miller said. “Fortunately, there are easy ways to protect yourself, such as wearing insect repellant and long-sleeved shirts and pants if you’re out at dusk when mosquitoes like to feed.”

County vector-control personnel — who help protect the public from “vectors” such as mosquitoes that can transmit disease to humans — said a dead red-tailed hawk found in San Diego and a dead American crow found in Santee had tested positive for West Nile virus in the last week. Nine birds have tested positive this year.

No people have been diagnosed with West Nile virus in San Diego County this year, but 339 people, including 11 who have died, have gotten sick across California in 2013.

West Nile virus is mainly a bird disease that can be spread to people when mosquitoes feed on the blood of an infected bird and then a person. Eight out 10 people who become infected with West Nile virus won’t suffer any symptoms at all. Most people who do get sick will suffer mild symptoms: headache, fever, nausea, fatigue, skin rash or swollen glands. However, in rare cases, people can suffer serious neurologic complications that can be life threatening. The risk of complications increases for those over age 50, and for people with weakened immune systems.

Protect yourself from mosquito bites by staying inside when mosquitoes are most active and by wearing long sleeves and pants when outdoors, especially at dawn or dusk. Use insect repellents containing DEET, Picaridin, Oil of Lemon Eucalyptus or IR 3535 when you are outdoors. Keep screens on doors and windows and make sure the screens are in good condition.

Miller said the County’s new free West Nile virus smartphone app makes it easier than ever to report neglected pools, mosquito breeding grounds or dead birds — and to get important updates about the disease.

Anyone with an iPhone, Android or Blackberry smartphone can submit anonymous reports to County Vector Control by using the app to snap a photo, type in the address and send it in.

The app is available on the County App Center, at http://www.sdcounty.ca.gov/appcenter/. Look for the “Fight the Bite” logo.