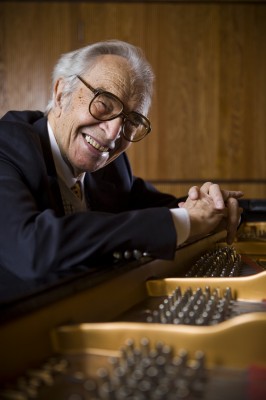 Dave Brubeck at the University of the Pacific in Stockton, California December 14, 2008.

NEW YORK, NY – Jazz and pop singer Tony Bennett, legendary jazz promoter George Wein, record producer, entrepreneur, musician, and recording engineer Larry Rosen, pianist and composer Chick Corea, and a host of other jazz artists showed up at the only public memorial held to celebrate the life and music of the late jazz pianist and composer, Dave Brubeck, who passed on December 5, 2012. The 2,000 people who attended the standing-room only event in New York City’s The Cathedral Church of Saint John the Devine on May 11, 2013, were serenaded with warm and fond memories and musical performances from musical dignitaries in the jazz world.

Everyone who came to the massive cathedral came from all walks of life. Some wore fur coats, while others were dressed in designer suits and dresses and were dropped off in stretch limousines and private town cars. Then there was the sight of average men and women – young and old, who came as far as London, as well as local New Yorkers, who came by train and bus to pay their respects and appreciation to the one man who personified the Cool Jazz style of the late 1950s and early 1960s, California’s Golden Boy, Dave Brubeck.

Brubeck’s persona known by millions with his thick-framed glasses and a radiant smile that could light up anybody’s day, broadcasted optimism and adventure – graced the cover of TIME in 1954, which hailed him as the herald of “a new kind of jazz age.” For many jazz fans, this era began with the fulfillment of a dream that had intrigued musicians as far back as Scott Joplin, which was to bring jazz and European music into alignment. Many had tried and failed; Brubeck, like the rocket scientists celebrated in the emerging space age, found the formula that made the dream possible.

His quartet was his medium to usher in this new sound. Its sound was smooth, sleek, and cerebral – straight-up jet-age jazz is what you got. The group transformed rhythm, once the sweat and blood of this music, into abstraction, something to contemplate and savor like a classic Renoir painting. Brubeck’s harmonies had very little to do with funky sevenths or flat fives. 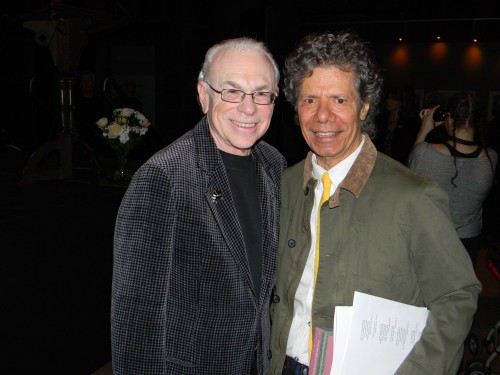 The 87-year-old legendary jazz creator, promoter, and producer of the Newport Jazz Festival,  George Wein, spoke at the memorial service and confessed that Brubeck was not readily accepted when he first started out: “A lot of the beboppers and jazz critics at the time thought Dave was a cop-out and did not appreciate the traditional swingers and dixielanders of the day.”

Perhaps Dave’s harmonies sounded chaotic even to the ears as educated as the well-known music critics of the 1950s, but from the perspective of the music critics of today, his music has more in common with progressive rather than subversive composers; there is more Beethoven than Schoenberg in his chords. Yet, today Brubeck enjoys near universal reverence as revealed in the memorial service, from his past peers George Shearing, John Lewis; his contemporary Marian McParthland, and younger generations such as Keith Jarrett, Chick Corea and the late Dr. Billy Taylor, who recognized him as an artist of complete originality.

Chick Corea revealed to San Diego County News at the memorial service of his complete respect and admiration for Brubeck: “Brubeck’s style is the easiest to recognize in the jazz catalog, with its distinctive blend of intelligence, playfulness, occasional heavy-handedness, and transparent love for the blues.” 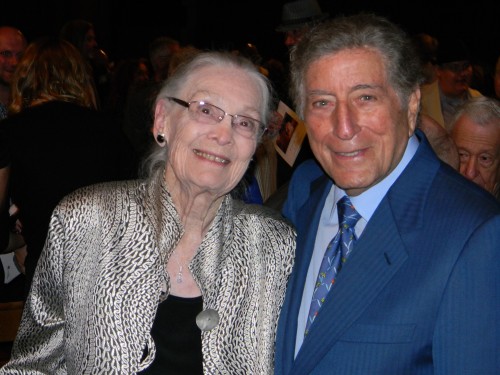 The qualities that define Brubeck derive from a background unlike that of any jazz artist of comparable stature. He was a farm boy, the son of a cattle rancher who had also made a name for himself as roper on the rodeo circuit. From the start, cows and music was his life; though he was already composing and playing his own works by age four, Dave assumed that his siblings would wind up working as musicians while he followed his dad into the livestock trade.

He was still playing dance gigs, six nights a week when he entered the College of the Pacific, but as a major in veterinary medicine he seemed ambivalent about committing himself to music. That began to change when he met Iola Whitlock, a fellow student and director of a music show on the campus radio station. Two weeks after their introduction Dave proposed to her, and they were married on September 21, 1942. It was Iola’s inspiration and talent that would help launch Dave Brubeck’s career in music and sustain it for more than five decades. 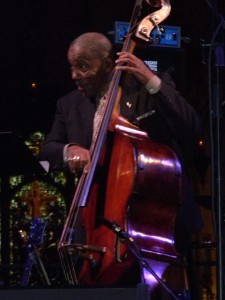 “David was modest man and a deeply devoted family man above anything else,” Iola Brubeck commented. “Even though we shared a life-long passion for music, particularly jazz, David really did not consider himself to be a virtuoso pianist.”

David Brubeck served in the U.S. Army and was a band man as well as a rifleman. He was tasked to form a jazz band consisting of wounded musicians who were sent back through the replacement depot. The band he created, The Wolf Pack, was probably the first “non-segregated” group of musicians in the armed forces which followed General George S. Patton’s army all the way through France and Germany, got caught behind the lines during the Battle of the Bulge, and during the occupation performed with USO shows.

After WWII ended, Dave began his studies in composition with the French composer, Darius Milhaud at Mills College in Oakland. It was here that Brubeck musical career began to blossom. Under Milhaud’s mentoring, Dave, along with other classmates (Dick Collins, Dave van Kriedt, Bill Smith, Jack Weeks) and friends from San Francisco State (Paul Desmond, Bob Collins, Cal Tjader), he organized the Jazz Workshop Ensemble that evolved into the Dave Brubeck Octet.

The Birth of Dave Brubeck Quartet

To earn a living for a growing family, Dave played in clubs in the Bay area and began to gain a reputation as a jazz pianist. He was enthusiastically promoted by a dj named Jimmy Lyons, who later established the Monterey Jazz Festival, the Dave Brubeck trio with Tjader and Ron Crotty broadcasted once a week on KNBC and made their first recording. It was then that Dave caught the ears of Duke Ellington, who encouraged him to go to New York to be heard and tested.

After having some success with the trio, in 1951 Dave suffered a crippling back injury while swimming in Hawaii. After three weeks in traction he went through a long period of recovery before picking up his career again, this time with his first quartet.  Composed originally of saxophonist Paul Desmond, bassist Bob Bates, and drummer Joe Dodge, the group switched to drummer Joe Morello in 1956 and bassist Eugene “The Senator” Wright (89-year-old performed at the memorial) in 1958. It was this lineup that would capture the public’s imagination with one of the most celebrated albums in the catalog, Time Out, featuring Desmond’s Take Five, the first single recording in jazz to sell more than a million copies! 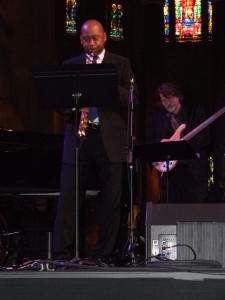 From that point on Dave Brubeck’s career shot off  like an Indy 500 race car. A prolific writer, he signed his name to a number of wonderful ballads, beginning in 1960 with Points on Jazz, four cantatas, an oratorio, and an ambitious fusion of Broadway with jazz, The Real Ambassadors, premiered at the Monterey Jazz Festival in 1962. He has performed at the White House, entertained the Gorbachevs at a Moscow soiree, and filled a house with trophies that includes a BMI Jazz Pioneer Award, National Medal of the Arts, Kennedy Center Honors Medal, DownBeat and Metronome recognitions, and numerous of honorary doctorates and additional awards.

Brubeck and Iola had six children together (Christopher, Daniel, Catherine, Darius, Michael, Matthew), and a host of grandchildren and great-grandchildren. Dave and Iola celebrated their 70th wedding anniversary in September 2012, and he died on December 5, 2012 with family surrounding him just one day shy of what was to be his 92nd birthday on December 6.

I got the chance to see and talk with Dave Brubeck on several occasions over the years. Performing That Old Feeling from One Alone in 2000, he slides in and out of bitonalism, his right hand slipping occasionally to a minor third above the left. What’s so surprising is how smooth he makes it sound; with delicate, reflective phrasing, Brubeck transforms the resulting dissonances into poetic language of interpretation.

Watching Brubeck perform on stage and in clubs was as if you were witnessing the voice of a lion in winter; but if we look past his white mane and ignore the prophet-like smile lines that shaped his over 91 years of delight with life, Dave Brubeck still projects the enthusiasm of youth which is entrenched in his enduring classics of work, in his beloved and talented wife Iola, his children, grandchildren, and great-grandchildren. Dave Brubeck’s quest for adventure and bottomless optimism is perpetual.