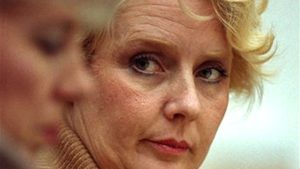 Broderick, 69, was convicted in 1991 of the shooting deaths of Daniel Broderick, 44 and Linda Kolkena Broderick, 28. Elizabeth Broderick received 32 years-to-life in prison for the murders. She was denied parole at her first parole hearing in January 2010.

“Elizabeth Broderick remains an unreasonable risk of danger to society,” DA Bonnie Dumanis said. “She still has not developed appropriate insight or remorse for these gruesome murders, which she committed with a callous disregard for human suffering.”

Elizabeth Broderick illegally entered the home of her ex-husband, Dan, and his new wife, Linda, in the early morning hours of November 5, 1989. She used a key that she surreptitiously took from her daughter several weeks prior. She sneaked up the stairs to their bedroom as they slept and unloaded her five-shot revolver into their bodies. The victims dived for cover in their bed when Elizabeth Broderick started firing. Three shots were direct hits, each of them fatal. The remaining two shots just barely missed her intended victims.

Dan Broderick fell off the bed after being shot in the back, while attempting to reach for the telephone to call for help. Elizabeth Broderick calmly walked around the bed, grabbed the phone, pulled it from the wall, and dumped it in the hallway out of reach. She left the scene and was captured later that day.

Deputy District Attorney Richard Sachs will appear on behalf of the People of the State of California at the hearing to argue before the Board of Parole Hearings that Elizabeth Broderick remains a risk to society.