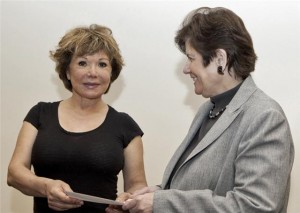 San Diego District Attorney Bonnie Dumanis announced that more than $1 million in restitution payments are being distributed to victims who each lost between $10,000 and $100,000 in an investment fraud scam.

After filing charges against Janet Reiswig, 66, and her husband, Ronald, 73, prosecutors with the DA’s Office froze the defendants’ assets with the eventual goal of obtaining restitution for the victims. That day arrived today as DA Dumanis and the prosecutor in the case, Deputy District Attorney Anna Winn, personally presented checks to some of the victims, most of whom are elderly.

“Our office, and the Economic Crimes Division in particular, works very hard to meet the material and emotional needs of crime victims,” said DA Dumanis. “That includes trying to make victims of financial crimes whole again by getting back their hard-earned money.”

A total of $1,055,231.87 in restitution was obtained, representing about 56% of the victims’ investments in the scam. Janet Reiswig pleaded guilty to cheating investors out of about $1.8 million by selling phony certificates of deposit. She was sentenced February 18 and received a total term of 14 years and four months, which includes a sentence in a separate case in Orange County.

The Reiswigs were charged with a total of 109 felonies involving 40 victims who gave the couple $10,000 to $100,000 each for certificates of deposit. The Reiswigs promised interest rates slightly higher than those offered by banks and other financial institutions. Instead of investing the money, the couple deposited it in their own bank account and spent some of it on themselves. The couple spent $800,000 in 11 months on items that included a motor home and two cars. They had offices in Rancho Bernardo and La Jolla.