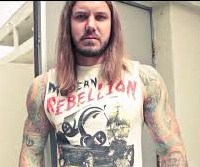 SAN DIEGO—The lead singer of local rock group, “As I Lay Dying,” was charged with one felony count of solicitation of murder in connection with his estranged wife, District Attorney Bonnie Dumanis says.

Timothy Lambesis was arraigned in San Diego Superior Court Thursday and entered a plea of not guilty. He faces nine years in state prison. He remains in custody on a $3 million bail and was ordered to stay away from his wife and children, to surrender his passport and to remain in San Diego County except for meetings with his legal team. He must also submit to GPS monitoring.

The defendant was arrested by San Diego Sheriff’s deputies in Oceanside on May 7.

A readiness hearing for Lambesis has been set for June 10 and a preliminary hearing is scheduled for July 10.