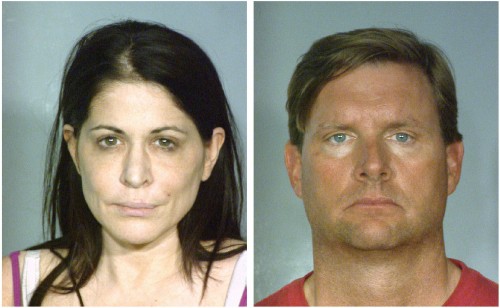 SAN DIEGO–A fake insurance agent and his wife have been charged with 11 felony counts including burglary, grand theft, theft from an elder, tax evasion and other charges for their roles in bilking $1.9 million from hundreds of San Diego County senior citizens in a scam in which the couple sold phony ‘in-home service agreements.’

were arrested at their home in Las Vegas, Nevada on April 10 and extradited to San Diego to face charges. Both were arraigned April 26  in San Diego Superior Court.  They face up to 16 years in local prison if convicted of the charges.

“The defendants in this case were ruthless and heartless in the way they targeted the elderly and sold them fake insurance policies,” District Attorney Bonnie Dumanis said. “I’m proud of the work our Insurance Fraud Unit is to bring justice to these victims and other senior citizens who became victims of elder abuse in the community. We’re also encouraging anyone who bought an in-home service agreement from these defendants to come forward.”

For nearly a decade, Michael and Melissa Woodward swindled 238 San Diego seniors out of more than $1.9 million in premiums. They would target elderly senior citizens at their homes telling them that for a prepaid annual fee, the victim could get an unlimited amount of non-medical services such as cooking, cleaning, bathing, toileting, dressing, laundry and shopping. To receive services, he told the victims, they should call him and provide a doctor’s note.

“Both defendants ran an unscrupulous plan to bilk innocent seniors,” said Nevada Attorney General Catherine Cortez Masto.  “I encourage Nevadans who may be victims of this crime to report it to our office. The successful arrest and charging of these defendants is the result of cooperation among states.  I am thankful we were able to collaborate across state lines in order to prevent this couple from continuing their insurance scheme.”

In reality, Woodward’s plan was a sham. He and his wife were the only employees of the company and were not able to provide the in-home services he offered. The most he did includes paying a third party to provide the requested services, or reimbursing seniors for the expense of acquiring services on their own.

“The extent to which the Woodwards went to rip-off vulnerable seniors and attempt to hide their crime is shocking,” said Insurance Commissioner Dave Jones. “The good work done by Department of Insurance investigators and the District Attorney’s Office made the difference in uncovering this scam and putting a stop to their criminal enterprise.  I’m pleased our investigative partnership with the District Attorney is making a difference.”

Inexpensive claims, such as requests for housecleaning, were often paid, but when victims made claims that were more expensive, Woodward would not return phone calls and would reject the claim. He also routinely returned to victims’ homes to collect additional premiums, well beyond the original cost he quoted for the plan.

The Woodward’s fraudulent activities in San Diego follow similar actions in other states including Washington, Oregon, Minnesota and Texas. In all, he bilked victims out nearly $6 million across the nation. When dealing with senior citizens, he often used false names such as Mike Woods or Mike Smith, making it difficult to research his past.

In keeping senior citizens safe, the key to prevention is knowledge and awareness. In addition to the Insurance Fraud Division, which is handling this case, The District Attorney’s Office has a top-notch Elder Abuse Prosecution Unit. They handle 210 felony cases per year with a lead prosecutor, two victim advocates and a full-time investigator.

Information on how protect yourself and your loved ones from becoming victims of elder abuse can be found on the District Attorney’s public website at www.SafeSeniorsSanDiego.com