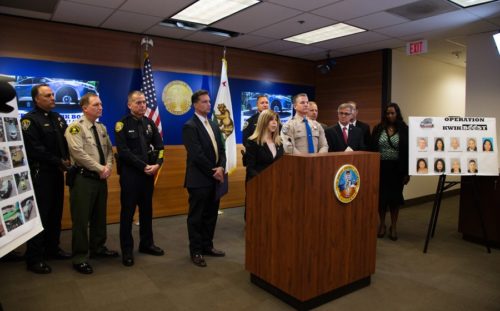 “San Diego County ranks fifteenth in the nation for auto theft – a huge improvement from 2007 when we were third nationwide,” DA Dumanis said. “Since RATT has been attacking this problem, auto theft is now down about 75 percent to about 10,000 a year.”

Operation Kwik Boost was launched in January in an effort to draw out and identify those criminals who were dealing locally in stolen vehicles. During the course of the investigation, narcotics and weapons were also seized. Law enforcement officers from RATT would purchase stolen vehicles directly from defendants. Some of the identified auto thieves were also involved in identity theft and insurance fraud.

During the crackdown, undercover officers purchased stolen cars, drugs and weapons at locations throughout San Diego County. The 42 auto thieves were caught thanks to extraordinary cooperation between RATT, La Mesa Police, Sheriff’s Deputies, CHP and ATF.

Of the 42 indicted, 32 are in police custody. Many were arrested yesterday, during an early-morning sweep in San Diego County. Defendants in this investigation face varied sentences, from three years to 25 years in prison. Some of the defendants will be arraigned at 10:00 a.m. Friday, December 2, 2016 in Department 11 of the downtown Superior Court.

Evidence seized during the operation includes 117 stolen cars valued at $1.3 million, 51 firearms, five and a half pounds of methamphetamine, three kilograms of cocaine and 15 pounds of marijuana.

“Through a collaborative effort to include city, county, state and federal resources, the law enforcement community has made a significant impact in reducing auto theft throughout San Diego County,” said RATT Commander Don Goodbrand.

RATT’s partnership with other law enforcement agencies is a police force multiplier and produces dramatic results.

“This effort leveraged local, state and federal partnerships to seek the most-appropriate prosecution and maximum sanctions for the public we serve,” said ATF Special Agent in Charge Eric D. Harden. “It’s a model of the cooperation between our San Diego area law enforcement professionals.”

The Sheriff’s Department also played a large role in the takedown.

“The Regional Auto Theft Task Force is a regional effort where federal, state and local law enforcement work in partnership to reduce incidents of auto and cargo theft,” Sheriff Bill Gore said. “Operations, such as Kwik Boost, help identify and dismantle criminal operations whose primary goal is to profit from vehicle theft and related crimes. The San Diego County Sheriff’s Department is proud to work in partnership with area agencies toward this goal. We are proud of the work that has been done on this case and know that operations such as these go a long way in protecting our communities.”

Ten suspects remain outstanding. The RATT Taskforce is seeking the public’s assistance in locating and apprehending them. Call the RATT Hotline at (888) 835-5728.