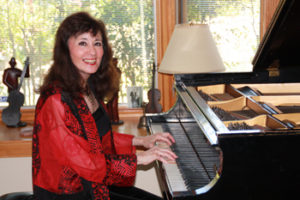 SAN DIEGO–Pianist and Broadway veteran Jacquelyne Silver will take the stage December 5 at Cygnet Theatre in Old Town to reminisce about her life in musical New York with Leonard Bernstein, Benny Goodman, Luciano Pavarotti, and the greats of the Metropolitan Opera.

She’ll share her joy of music from Ragtime to Rachmaninoff, from Brahms to Broadway. The audience will be invited to sing along to the music of My Fair Lady, Oklahoma, Showboat, Fiddler on the Roof, West Side Story, A Little Night Music, and more. Proceeds from this one-night-only performance benefit Cygnet Theatre’s educational programs.

Pianist and stage personality, artistic innovator and educator,  Silver, a graduate of The Juilliard School, has performed at the major music centers of North America. Witty, erudite, versatile and entertaining, Silver’s performances are filled with passion and elegance, and she delights her audiences with her storytelling and pianistic expertise. She has been a guest on The Tonight Show, The Dick Cavett Show, and The Alan King Show, as well as on radio and television specials. Locally, she has presented a series at the Athenaeum of La Jolla and the San Diego Museum of Art. This is her first performance on the Cygnet Theatre stage.

She is Director of Silver Pathways to Music, and composes, directs and produces videos for children on America’s history and its grand music. She composed, directed and conducted shows as diverse as Dylan Thomas’s A Child’s Christmas in Wales, and the children’s opera, Babar the Elephant, both at Lincoln Center in New York City.

Audience can attend a 6:30 p.m. pre-show reception with hosted wine and refreshments. Performance begins at 7:30 p.m. Tickets are $40 per person.