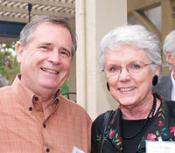 For two years, Cygnet and Associate Artistic Director Rob Lutfy, have partnered with the Playwrights Project to present Playwrights in Process which included a multi-day festival including readings, workshops and a reception. This new program has a deeper commitment to helping a playwright finish a work and move toward a possible full production. In addition, Cygnet Theatre will become an associate member of the National New Play Network – a coalition of nonprofit theatres around the country committed to new work.

“At Cygnet, we believe the best way to really have an impact on the American theater is to focus on new plays. The footprint of this program is to allow writers to work on their dream play. This could be a play that may have been sitting in their computer for a few years or a play that was given a commission but never produced. Basically, a play that needs a home and support getting over the finish line,” explained Lutfy. “By producing new plays, we are directly supporting living artists who are in the prime of their creative years. We are helping to keep artists in the business of making art, an essential service to our community and to our times.”

Plays awarded a Finish Line Commission will be given a week long workshop at the theatre in November, a financial reward and an assurance that the play will have a shot at a world premier production at Cygnet.

“These will be plays from writers in whose work we have a committed interest and whose voice speaks to our mission and our community,” explained Lutfy. “These are plays that are not submitted to us, rather playwrights we seek out. These readings give the playwright the opportunity to develop the play and give Cygnet Theatre the exposure to potential new collaborators for our main stage programming.”

“We enthusiastically support the nurturing of new playwrights who are exploring provocative, entertaining, contemporary stories and topics to add to the vast lexicon of theatrical works currently available to performers and audiences. We’re delighted to be able to help create new works for today’s audiences,” Judy Garrett said.

Playwright Rachael VanWormer’s Death of a Late Summer Songbird – Set in the South in the midst of the Great Depression, a young woman struggles against the odds to keep hope alive for her withering family. When an unlikely friendship challenges the fundamental values with which she has been raised, she is faced with an impossible choice.

Playwright Nathan Alan Davis’ The Wind and the Breeze – Sam, the legendary, undisputed, greatest emcee in Rockford, IL, plans to rest on his laurels all winter and, if possible, stake out an early spot to watch the Independence Day fireworks -but his closest mentees and their outsized dreams challenge him to a battle he can’t win. The Wind and the Breeze explores the politics of place, the unspoken expectations of friendship and what happens when we choose to stand our ground on shifting sands.