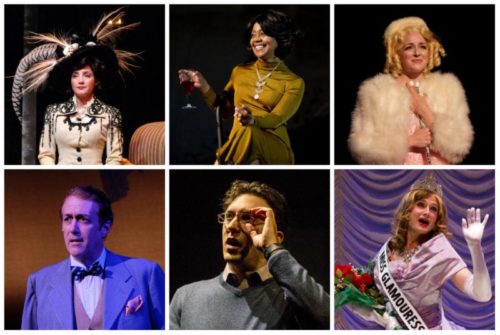 SAN DIEGO–Cygnet Theatre have launched its 2017/2018 season with music, comedy, drama and more.

Cygnet begins the season – with the laugh-out-loud musical comedy “Animal Crackers,” based on the original Marx Brothers movie and Broadway hit. Hijinks meet high society when Captain Spaulding and his cronies mix up with social climbers and stolen paintings. A hilarious book written for the Marx Brothers by George S. Kaufman and Morrie Ryskind, this slapstick, madcap musical busts out with zany songs, quick changes and lavish dance numbers.

Directed by Sean Murray, with costumes by Jennifer Brawn Giddings and a featuring a cast including Josh Odsess-Rubin and Bryan and Katie Banville, you can expect Groucho, Chico, Harpo, and Zeppo to kick off the season with comedic anarchy and improv that just might change nightly.

In the fall, Cygnet, embrace the dreams, struggles and innocence of adolescence with the 1971 Pulitzer-Prize winning drama, “The Effect of Gamma Rays on Man-in-the-Moon Marigolds. Directed by Rob Lutfy, this intimate look into the lives of a dysfunctional family illustrates universal truths about the human struggle for acceptance and reveals how each person adapts and responds differently to life’s harsh uncertainties. Written by Paul Zindel, a playwright and science teacher, the play is often called “Tennessee Williams-esque” for its moving look at a mother and her two daughters struggling in a home that is more like a madhouse. Audience members may recall the film directed by Paul Newman featuring Joanne Woodward and the award-winning 1978 Broadway production featuring Carol Kane and Shelly Winters.

Other plays on the list are: “The Legend of Georgia McBride, a show that celebrates finding your own voice and signing your own song, and holiday family favorite “A Christmas Carol.”

The first play of 2018 is “The Last Wife” – a bold and contemporary return to Tudor England and the story of Henry the VIII’s strong-minded wife, Katherine Parr, a feminist before her time. Brilliantly written by veteran Canadian actor and playwright Kate Henning, this is only the second US production.

In the spring, the theatre revisit one of their favorite Stephen Sondheim musicals, “A Little Night Music.” Originally presented in 2008, Sean Murray will direct and act in this sophisticated, literate and stylish, romp through the country.

Cygnet close the season with the world premiere of “The Wind and the Breeze,” which was first introduced to Cygnet audiences through the Bill and Judy Garrett Finish Line Commission.

Current Cygnet subscribers will be notified by mail regarding subscription renewals. New subscription sales will be available beginning March 1.

For more information regarding subscriptions packages, contact the box office at (619) 337-1525, or visit www.cygnettheatre.com.