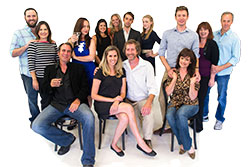 The cast of Company. Photo by Manny Fernandes

“Company” is a musical comedy based on a book by George Furth with music and lyrics by Stephen Sondheim. The original production premiered in 1970 and was nominated for a record-setting fourteen Tony Awards and won six. “Company” runs July 5 through August 18.

The plot revolves around Bobby (a single man unable to commit fully to a steady relationship, let alone marriage), the five married couples who are his best friends, and his three girlfriends. “Company” is a concept musical composed of short vignettes, presented in no particular chronological order, linked by a celebration for Bobby’s 35th birthday. The show has enjoyed several revivals including a 2006 version that won the Tony for Best Revival of a Musical.

Directed by Sean Murray, Cygnet’s Artistic Director with choreography by David Brannen, Company features an ensemble cast of fourteen actors and an additional 6 musicians. Musical direction will be provided by Patrick Marion. Cygnet traditionally likes to tackle large-scale musicals which play well in their 246-seat theater in the heart of Old Town.

“I love the way Sondheim addresses issues that are relevant today with great integrity including marriage, relationship, commitment,” explained Murray. “As we have grown into one of the larger theatres in San Diego, we’ve been able to take on more musicals of this scale. We like to pick shows that reflect the work we like to do. This show might be cynical and jaded at times, but ultimately, it’s about the fact that people matter in your life.”

Notable and enduring Sondheim songs include “The Ladies Who Lunch,” “I’m Not Getting Married,” “Another 100 People” and “Being Alive.” The cast includes many Cygnet veterans, as well as several newcomers.