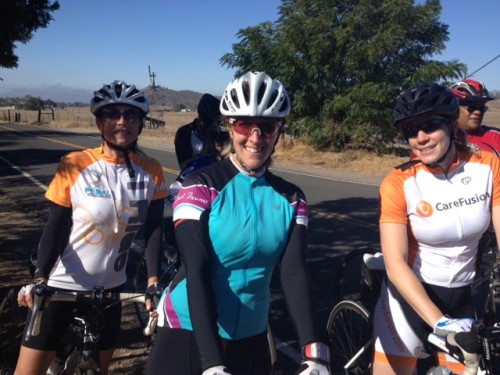 SAN DIEGO–More than a 1,000 bicyclists are expected to hit the road Saturday and Sunday to participate in the Pedal the Cause – San Diego, a local cycling fundraiser for cancer research.

One of those cyclist is Rebecca George, a former musical stage performer, who is riding in memory of her best friend, Debbie who died of cancer.

On Saturday, George will embark on a 90-mile route to Julian, arrive at Rider Village and camp for the evening. On Sunday, she will be riding through the coast of Del Mar before finishing in La Jolla, where all the riders will be greeted with a festival, including entertainment, food and beverages.

The two aspiring singers met while studying voice performance at the Manhattan School of Music in New York.

“We were both singers. We both lived in New York for years.” said George. “We didn’t do any shows together but supported of each other.”

After ten years of performing in New York, George moved to California which led to a job-related move to England.

George, who competed in triathlons in the past, rode in major fundraiser rides through France during her 5-years of living in England.

While cycling in England, George’s world was shattered when she was struck by a vehicle. Although, she recovered from her injuries, George’s love of cycling activities diminished after the accident.

Despite being miles apart, George continued her communications with Debbie, who since left the stage world for married life in Kansas.

On October 26, 2010, George received another devastating blow- her best friend, Debbie had passed away from cancer. George, who was living in the U.K. at that time was unable to travel to Kansas for her funeral service.

“The weekend that she died I was in England. I was not able to get back to England.” “She was always supported of my fitness,” George recalled.

She eventually returned to the states, and worked to regain her confidence in cycling by going on rides with her father.

Last August, George spotted an internet advertisement of Pedal the Cause cycling fundraiser on the internet. She decided to participate when she saw the date of the event. The date coincided with the anniversary of her best friend’s death from cancer.

“I learned about it because I was looking to get back into biking. I looked it up and saw the date when she past away,” she recalled.

To George, this fundraiser was an opportunity to both honor her best friend and to help raise money to find a cure for cancer.

George contacted Mark Palmer of B+L Bike Sports in Solana Beach to begin training for the 2-day trek from UCSD in La Jolla to Julian.

“It just seemed to make sense and without even logging off the Pedal website, I signed up and emailed Mark to tell him I had joined his team, and that he’d better be ready to do some coaching!” George said.

The Pedal the Cause event not only awaken George’s passion of cycling, but singing as well. On October 15, she hosted a special fundraising cabaret performance at the Carlsbad City Library Auditorium. The performance, titled Life is a Cabaret, and dedicated to Debbie, featured the off-Broadway singer belting out tunes accompanied by Elan McMahan, musical director at The Old Globe and Moonlight Stage and a recipient of the Craig Noel Award for musical direction.

George says she looks forward to the 2-day journey through San Diego‘s backcountry.

“I am really looking forward to the ride up to Julian in that ‘nervous anticipation’ kind of way. I know it will be hard work, and I am so excited to experience this both as a personal challenge and to meet people with the same passions for the cause,” she said.