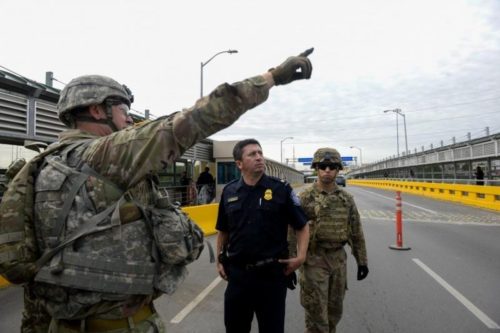 More than 5,000 U.S. military troops are in the southwest border region to support U.S. Customs and Border Protection officers and Border Patrol agents as they prepare for the expected arrival of thousands of Central American immigrants.

The close cooperation between Customs and Border Protection and the military is part of Operation Secure Line, which includes deploying personnel and resources to the region.

“We have these large caravans forming, coming up to our border. These are larger than we’ve seen in the past,” said Michael Hyatt, who usually serves as a Patrol Agent in Charge at a Border Patrol station near Tucson, Arizona, and is now the deputy incident commander for CBP’s emergency operations center in Washington, D.C. “Knowing this is going to be challenging for CBP, we have asked for assistance from the Department of Defense to help us in our mission to help maintain and keep an orderly border.”

Part of what the military is doing is shoring up security at the ports of entry. The troops have been laying concertina wire and placing vehicle barriers, Hyatt says.

“This helps us shape and maintain an orderly flow, instead of having a mass group coming through and trying to overrun a port. If you’re going to come to this country and make a claim of credible fear, you need to present yourself properly at a port of entry,” Hyatt said.

In addition, the military gives Customs and Border Protection an extra set of eyes on the security situation at the entry points. According to Hyatt, who has a National Guard background of his own, the military has a wealth of experience in doing this.

“It gives us a different viewpoint, looking and telling us about things that maybe we should consider or might have missed,” he said. “I think there’s a lot to be learned from this situation that can carry on going forward.”

Hyatt added it’s not just the Customs and Border Protection officers and Border Patrol agents who are flowing in and are ready to go to the region to help out their colleagues; the agency is providing what’s needed to its people who could be facing a historic influx of immigrants and asylum seekers.

“Everybody at CBP is working tirelessly and very hard to support our personnel out in the field,” Hyatt said. “Not just for this caravan, but in our operations every day, I’ve seen such a great level of support and collaboration to get what people in the field need to do their mission.”