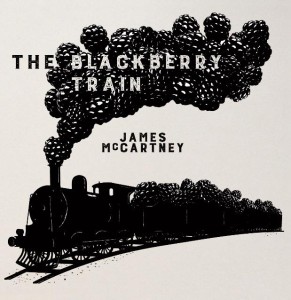 Singer-songwriter James McCartney’s signature aesthetic of melding smart hooks and feral alt-rock with the grandeur and spiritual centeredness of psychedelic music has won him press plaudits and a strong fan-base.
He’s built a robust international profile through tirelessly touring the US, Europe and the UK, playing bigger and bigger shows with each go around. Now, he issues the sharpest entry of his vision, the majestic The Blackberry Train. The record is engineered by Steve Albini, (Nirvana, The Pixies and PJ Harvey) and will be released worldwide May 6 by Kobalt Label Services. The opening track, “Too Hard”, will be available for instant download on iTunes and on Spotify with pre-order.
On the track, which can be described as a jangling rocker, McCartney says: ” I wrote it in L.A, and tried to infuse it with a country feel to really bring out that desperation, and the idea of trying too hard. Dhani Harrison came into the studio and we both collaborated on the guitar solo in the song.”
In December 2015, before Christmas, McCartney played a 3-show residency at The Islington in London, where he debuted material from The Blackberry Train to sold out audiences every night. This summer James McCartney will be sharing tracks from his new release as he tours the U.S. in the summer.
“It’s all been an evolution,” McCartney says. “This set of songs definitely has a harder edge, but it’s a continuation of the last album. The main thing for me is to not conform or compromise.”
The Blackberry Train manages to be both diverse and cohesive. The album opens invigoratingly with the jangling rocker, “Too Hard” and closes with the stately and aptly named folk song, “Peace and Stillness.” Between these bookends, highlights include the rough-edged and urgently melodic “Unicorn,” the anthemic “Peyote Coyote,” and the soulful ballad “Prayer.” One very personal song is the winsome and reflective “Waterfall” which was inspired by memories of his mother.
To accurately capture the music in his head, McCartney sought out the distinct audio stylings of Steve Albini. The results make for an edgy and eclectic album with fastidiously crafted songs documented in the studio with glorious purity.
“I like the music to have elements of the avant-garde, psychedelic, and be just a little against the grain,” McCartney reveals. “But in the end, it’s about having as much emotion as possible for me, musically and lyrically. It’s all about the music being cathartic, heartfelt and true.”