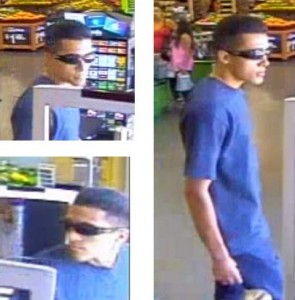 SAN DIEGO–Crime Stoppers and investigators from the San Diego Police Department’s Robbery Unit are asking for assistance from the public to help identify and locate a suspect wanted for an attempted robbery at the Walmart Neighborhood Market in the Logan Heights area.

On July 17, at 12:07 p.m., an unknown suspect approached the service counter at the Walmart Neighborhood Market located at 2121 Imperial Avenue in San Diego. The suspect was carrying a 12-pack of Bud Light beer. He placed the beer on the counter and then handed the clerk a demand note, indicating he was armed with a handgun. The clerk became nervous and had a difficult time opening the cash register. He became impatient and took the note and walked out of the store. The suspect was last seen walking eastbound on Imperial Avenue. There was no loss to the business.