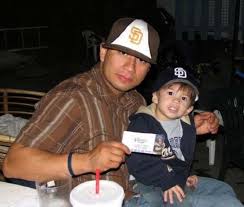 Robert Juarez and his son.

SAN DIEGO–Crime Stoppers and San Diego homicide detectives are searching for leads in the murder of a San Diego man.

On the morning of July 10, 2008, Juarez was leaving his Barrio Logan home, en route to work, when an armed suspect approached on foot and shot Juarez as he started his vehicle. The suspect ran to a waiting vehicle, which picked up the shooter and fled the scene. The shooter and getaway driver are believed to be Latino males. The suspects fled in a newer, cream-colored, four-door Cadillac DTS, and was last seen eastbound on Logan Avenue. At the time of the shooting, the getaway driver was wearing a blue construction hard hat.

On Friday at 8 p.m., Robert Juarez’ family and friends gathered at the Juarez home on Logan Avenue in San Diego to hold a candlelight vigil for the 7th anniversary of the murder.