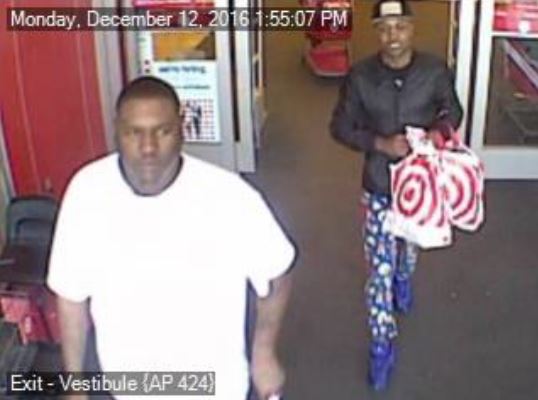 Authorities are looking for these suspects wanted on suspicion of stealing credit cards.

ENCINITAS–Crime Stoppers and investigators from the North Coastal Sheriff’s Station are asking for the public’s help to locate two men wanted on suspicion of stealing credit cards and identity theft.

The first suspect is described as a black man with a medium build and short hair. He was last seen wearing a white t-shirt and blue jeans.

The second suspect is described a black man with a thin build. He was last seen wearing a black jacket, black baseball cap with white print on front, blue jeans with doughnuts printed on them and blue shoes.

If you recognize the suspects or have information about this crime, call the North Coastal Sheriff’s Station at (760) 966-3500 or the Crime Stoppers anonymous tip line at (888) 580-8477. Crime Stoppers is offering up to a $1,000 reward to anyone with information that leads to an arrest in this case. Anonymous email and text messages can be sent in via www.sdcrimestoppers.org .