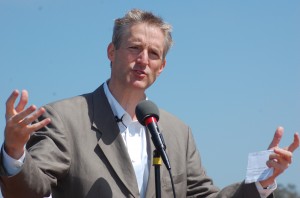 Lindbergh, founder of Creative Solutions Alliance, a nonprofit organization whose mission is to inspire and showcase innovation for a sustainable future, says the prize will serve as a focal point for a new project-based science, technology, engineering and math education program.

Creative Solutions Alliance is developing the prize and education program, in partnership with Aviation High School in Seattle, Washington and Experimental Aircraft Association, The Charles A. and Anne Morrow Lindbergh Foundation, and others.

Lindbergh says LEAP will bring electric flight to more people and will serve as a vehicle for creating a powerful project-based curriculum that will address the need for effective science, technology, engineering and math education.

“The Lindbergh Electric Aircraft Prize is the culmination of my work over the last decade in aviation, education and prize philanthropy, said LEAP founder, Erik Lindbergh. “LEAP represents the perfect focal point to light up both kids and adults. We are literally teaching the next generation to imagine and create their future.”

LEAP is a suite of prizes designed to promote the practical development of electric aircraft by recognizing specific advances in the emerging clean technology industry. The prizes will be awarded for the following:

Creative Solutions Alliance will announce the winners at the Experimental Aircraft Association’s AirVenture, the annual air show held each July in Oshkosh, WI.

“Hosting the pioneer technology of electric aircraft is a natural for Experimental Aircraft Association AirVenture, which as always been the annual showcase for what’s new in the world of flight,” said Tom Poberezny, EAA president and AirVenture chairman. “This area will play an increasing role in aviation in this century.”