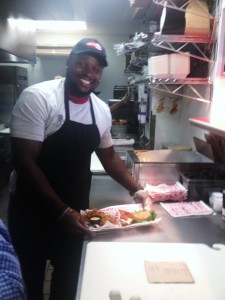 San Diego Charger Le’Ron McClain creates his own burger at the Smashburger restaurant in Hazard Center in San Diego. Five percent of the proceeds from the September 10 fundraiser will be donated to Le’Ron’s charity, The Wounded Warrior Project.