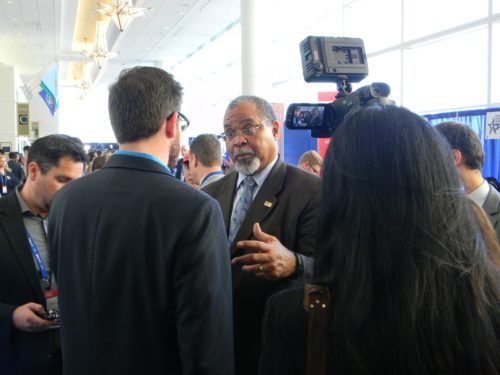 CPAC delegate Kenneth Blackwell, the former Republican Secretary of State of Ohio, said that Trump’s first month in office — with its anti-media tirades and efforts to use intelligence agencies for political purposes — has “reverberations of Watergate.” Photo: Danny R. Johnson/San Diego County News

NATIONAL HARBOR, MD – At last week’s Conservative Political Action Conference (CPAC) held in National Harbor, MD, Grand Old Party (G.O.P.) leaders, Ronald Reagan enthusiasts, and Donald Trump supporters all tried to put on a happy face of unity. Wrapped in Ronald Reagan’s genial embrace, the Republicans seem to be one big happy family, basking in the reflected glow of the President Trump victory and the take-over of the U.S. House of Representatives and U.S. Senate. Everyone should be wallowing in the thrill of victory – right?  However, San Diego County News has learned that the G.O.P is seriously divided over what to make of the Trump administration’s first 30 days, and is riven by factions that not only disagree on issues but harbor a distrust and even a thorough dislike of one another.

Those discordant strains could be heard beneath the harmony of last week’s carefully scripted CPAC gathering. Kenneth Blackwell, the former Republican Secretary of State of Ohio, said in an interview with this publication on Thursday that Trump’s first month in office — with its anti-media tirades and efforts to use intelligence agencies for political purposes — has “reverberations of Watergate.”

The president has never been a perfect fit for a group of true conservative believers such as the ones who convened at CPAC 2017. In fact, some leading voices on the right have protested his invitation in the past, due to his dalliances with birtherism and the Democratic Party. Last year, when Trump declined a CPAC invitation in the middle of his fight for the Republican presidential nomination, some conservatives interpreted it as a slight.

But victory can do a lot to heal old wounds, and Trump sure enough was greeted as a hero when he spoke to the crowd on Friday. And when he recited some of his conservative campaign slogans and recent executive orders, the crowd went into a mad and approvingly frenzy; but portions of the audience remain anxious about his foreign policy and his tax and spending proclivities. 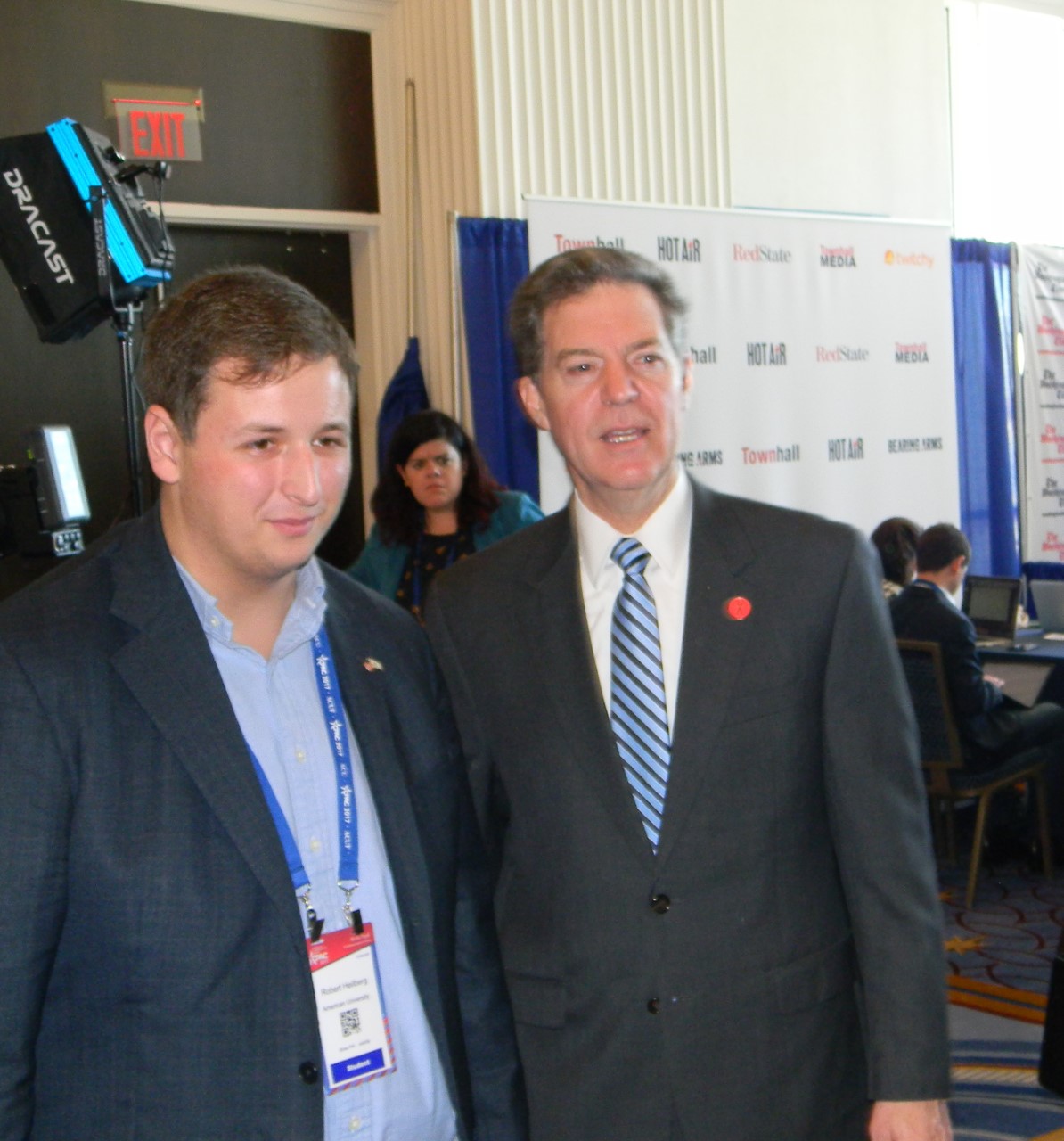 Governor Sam Brownback (R-KS) sated at CPAC 2017: “I want to see President Trump’s budget to Congress to see if there are any massive social programs spending and increases in the deficits.” Photo: Danny R. Johnson/San Diego County News

Governor Sam Brownback (R-KS) is one such skeptic who believes “the proof is in the pudding”: “We’re going to have to wait and see what happens when the president submits his budget to Congress. The Republican governors and I will be watching to see if there are massive federal spending and increases in social programs which are driving up the deficits,” Gov. Brownback stated.

In 2013, Trump told CPAC attendees Republicans weren’t going to win elections if they pushed for substantial changes to Medicare, Medicaid and Social Security – a policy he ended up running successfully on while placing him at odds with House Speaker Paul Ryan.

In his address to conservatives, Trump played it safe and touched on themes which are in sync with his base as opposed to reaching a consensus toward his brand of governing.

“He played it safe by giving a political speech trashing liberal Democrats and establishment Republicans. That will always be well-received at CPAC,” says U.S. Senator Ted Cruz (R-TX), a former 2016 contender for the Republican nomination, and a former bitter foe of Trump. “When he gets into his domestic policy agenda, he may encounter some turbulence.” 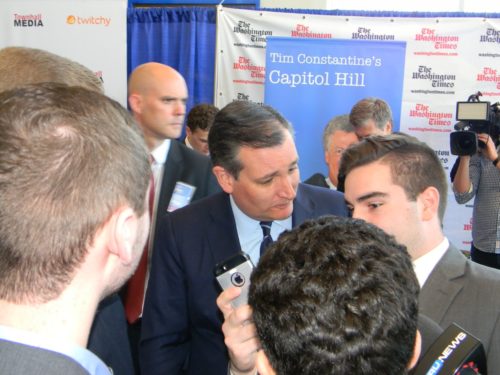 U.S. Senator Ted Cruz (R-TX), a former 2016 contender for the Republican nomination and a former bitter foe of Trump, “When the president gets into his domestic policy agenda, he may encounter some turbulence.” Photo: Danny R. Johnson/San Diego County News

The Republican Party has for decades been fundamentally split. The division has been partly ideological, but to an even greater extent cultural, regional and social. One branch has been dominated by a right-wing populist strand, predominantly Western, rural and Main Street, whose antecedents stretch back to the isolationists and McCarthyism. This wing has often vehemently opposed the G.O.P.’s so called Eastern Establishment, whose members are associated with Wall Street and country clubs; their views tend to be more sympathetic to Big Business, internationalism and political pragmatism. The bitterness peaked at the 1964 G.O.P convention, when the conservative followers of Arizona Senator Barry Goldwater tried to shout down his moderate rival, New York Governor Nelson Rockefeller, with a torrent of jeers and personal insults.

Trump hopes to capitalize on the Reagan mystique – but with a twist. Trump now heads up a rival Republican wing of self-styled populist conservatives who would gradually chip away the Reagan Revolution to fulfillment of a different sort. They would cut taxes even more, stressing economic growth and dismissing worries about red ink; escalate the attack on Big Government, drastically cutting government regulation to the bare essentials; restore diplomatic and military ties with Russia, use the power of the White House to bring antiabortion, anti-gay legislations and school-prayer bills to the floor of Congress and keep them there until they passed; not stint on building up the military and show no sign of softening to the so-called “fake media.”

This profound struggle for the party’s soul was on display at last week’s CPAC 2017. A group of young Turk conservatives led by 24 year-old CPAC delegate Jack Kenessky of New York, and 31 year-old Norman Gangoff of Georgia were having a spirited debate on the floor of the CPAC hall about whether or not the Republican Party should embrace same sex marriages. Kenessky was advocating for repeal of the Supreme Court ruling by an act of Congress, while Gangoff was stressing the importance of the Republican Party’s tolerance and expansion of the “Big Tent” philosophy. The two camps sniped at each other in a 15 minutes back and forth civil debate with 30 or more people watching, challenging each other’s views of the party’s future.

Now that President Trump has rescinded an Obama administration order that required schools across the country to allow transgender students to use whatever bathroom or locker room facilities they choose, the maneuvering and backbiting revealed that the party is split not just along one ideological fault line but into a variety of cultural and political factions that sometimes cooperate and often compete. Most party members resist pigeonholing, and many try to keep footholds in more than one camp. Alliances shift and regroup; certain issues make for odd bedfellows.

The steadiest and most faithful contributors to the success of Trump are religious fundamentalists. In 2016 many observers thought that the faith based and other born-again groups with political ambitions had amassed enough power to enact their moral agenda. And they succeeded. So far, Trump and Vice President Mike Pence have delivered the goods. While not a dominant force within the party, the fundamentalists are a strong pressure on its far-right flank and Trump.

In his interview, Blackwell examined into a bigger question: If Trump has so many similarities with Nixon, will his presidency end in similar fashion?

“The House and Senate are controlled by the Republicans, they’re not going to impeach President Trump,” he said. “As long as he gives them what they want and signs into legislation or signs into law a lot of the things that they’ve had to pass for decades, they’re not going to give him any problem…The process of Impeachment is not a one-time legal process. It’s a quasi-legal process, but it’s primarily a political process depending on who holds the cards. And we’re not there yet.”