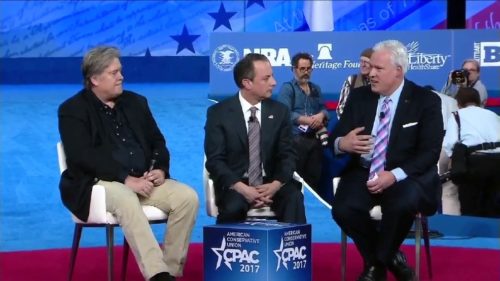 NATIONAL HARBOR, MD – White House Chief of Staff Reince Priebus and Senior Adviser to President Donald Trump, Steve Bannon, both knocked down media reports portraying them as adversaries and vindictive rivals in Trump’s inner court, and each said they are working together to advance the president’s controversial conservative/populist agenda.

The two most powerful men in Washington, DC got together on Thursday as President Trump’s top two advisers praised their boss, drench each other with compliments that at times seemed surreal. They also wasted no time in attacking the media for its coverage of the president at the yearly high-profile convention of the Conservative Political Action Conference (CPAC).

This year’s gathering of conservative activists were smaller in number at around 8,500 activists as opposed to last year’s gathering of 12,000. The three days event held at the Gaylord Hotel and Resort Convention Center about 20 miles outside of Washington, DC, was filled with speakers and Republican Party loyalists who at odds over what to think of President Trump.

Priebus and Bannon’s job was to reassure the crowd the conservative agenda that the Trump team campaigned on is being implemented: “Don’t listen to all the misinformation you have been hearing and reading about – all of it is untrue,” Priebus told delegates.

He added: “There’s a new political order that’s being formed out of this.”

Bannon added emphatically, telling the crowd: “They’re corporatist, globalist media that are adamantly opposed, adamantly opposed, to an economic nationalist agenda like Donald Trump has … If you think they’re going to give you your country back without a fight, you are sadly mistaken.”

The embattled Secretary of Education Betsy DeVos on Thursday called the transgender bathroom guidelines from the Obama administration “an overreach,” a day after the Trump administration rescinded those rules.

“This issue was a very huge example of the Obama administration’s overreach, a one-size-fits-all, top-down approach,” DeVos told the CPAC audience. These matters should be handled at a “personal and local level to settle out.”

DeVos’ words came less than a day after the Department of Justice and the Department of Education issued a joint statement about the decision “to withdraw and rescind” guidelines issued last year by the Obama administration requiring that schools allow transgender students to use restrooms matching their chosen gender rather than their birth gender. The announcement has drawn anger from LGBTQ rights groups. It also comes before the Supreme Court hears the case of Gavin Grimm, a Virginia high school student seeking a nationwide bathroom standard for transgender students. The court will likely hear Grimm’s case in March 2017. 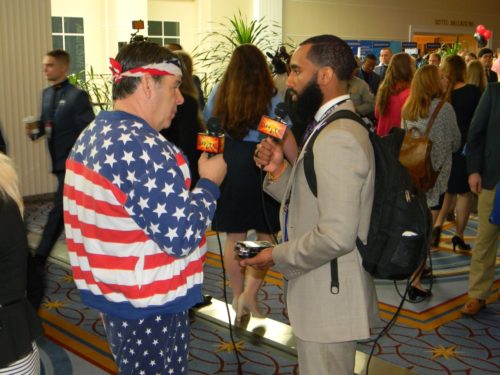 According to the New York Times, DeVos had at first resisted rescinding the rules because of the potential harm such actions would cause for transgender students. This put her at odds with Attorney General Jeff Session, the Times reported, and President Trump told DeVos to end her opposition earlier this week.

CPAC 2017 saw something new this year – Brietbart News and Facebook held premium locations on the main convention floor and the exhibition hall.

Facebook has reportedly contributed $120,000 to CPAC, according to a report by the Daily Beast. “Facebook’s contribution is worth more than $120,000, according to our media sources,” the Daily Beast reported on Tuesday. “Half of that is cash, and the other half is in-kind support for CPAC’s operations. Facebook maintains space at the conference for attendees to film Facebook Live videos, and will also train people on best practices for using the social network and Instagram American Conservative Union Matt Schlapp, who hosts CPAC, praised Facebook’s involvement with the conference.

“We are glad Facebook agreed to be at CPAC and to acknowledge the importance of conservatives to their company, and we continue to work with them on issues important to conservatives,” he declared.

The liberal media entity called Media Matters stated last week in an article posted to its website headlined – “CPAC Is Trying To Wash The Alt-Right Stench Off Breitbart.”

In cable news interviews and speeches from the conference lectern, CPAC’s organizers have condemned the “alt-right” — even having security very publicly remove from the premises Richard Spencer, the white nationalist who originally coined the term.

But at the same time, they have vouched for Bannon, are hosting seven Breitbart staffers and accepting a sizable donation of $210,000 from the website, and they even claimed that the “alt-right” is really made up of liberals. Bannon’s “alt-right” ties went unmentioned at Thursday’s afternoon when he sat alongside Priebus for their “conversation love fest” with Schlapp.

In a speech on Thursday morning titled “The Alt Right Ain’t Right at All,” the ACU’s Dan Schneider claimed that the term “alt-right,” which he claimed had previously “been used for a long time, in a very good and normal way,” had been “hijacked” by a “hate-filled, left-wing fascist group” that “stole the term specifically to confuse us.”

Bannon himself described Breitbart last year as “the platform for the alt-right,” and he led the website in an anti-immigrant, anti-Muslim, misogynistic, ethno-nationalist direction that appealed to that movement. He hired Milo Yiannopoulos and had no apparent problem with the despicable commentary and activism he wrought — or the way he championed the “alt-right.”

San Diego County News talked to some of the CPAC participants to get their reaction to the election of Donald Trump as president.

“It is remarkable Trump proved that something wonderful as an Inauguration speech could be turned into something so dreadful,” explained Kathy Sullivan, a Certified Public Account from Austin, TX. “I did not vote for Trump and I despises him to his core – he is a disgrace to America.”

Another delegate to the CPAC had a different view: “Trump is just what this country needs – someone who will tell it like it is and do what he says he would do,” stated retired Delta Airlines machinist, Doug Cameron.

In closing, it would be interesting to note that 16 years ago, the late William F. Buckley, the founder of National Review and host of Firing Line wrote this about Donald Trump and it’s unnervingly accurate: “Look for the narcissist. The most obvious target in today’s lineup is, of course, Donald Trump. When he looks at a glass, he is mesmerized by its reflection. If Donald Trump were shaped a little differently, he would compete for Miss America. But whatever the depths of self-enchantment, the demagogue has to say something. So what does Trump say? That he is a successful businessman and that that is what America needs in the Oval Office. There is some plausibility in this, though not much. The greatest deeds of American Presidents — midwifing the new republic; freeing the slaves; harnessing the energies and vision needed to win the Cold War — had little to do with a bottom line.”