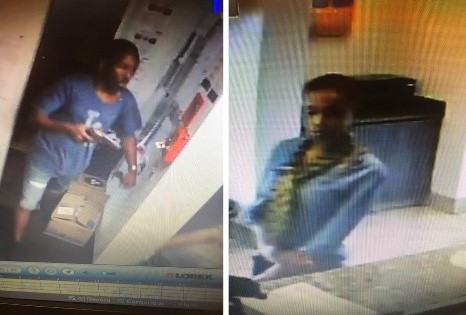 Surveilance images of the robbery suspects.

CARLSBAD–Authorities are searching for a couple who robbed on a Motel 6 and assaulted a clerk with a handgun, the Carlsbad Police Department said.

On July 9, just after 10 a.m., police officers were called to the motel, located in the 6100 block of Paseo del Norte, regarding a robbery.

The victims reported two suspects, one male and one female, had entered the motel lobby and demanded a free room. The male suspect showed the clerk a silver hand gun and demanded cash.

The suspect hit the female clerk on the head with the handgun. The suspect discharged the firearm during the confrontation.

The male took the clerk’s car keys and, with the female suspect, fled the motel and stole an unoccupied 2017 white Toyota Corolla with the California license plate 7VPV398.

The clerk was taken to a local hospital to be treated for her injuries.

The female suspect is described as a black female adult, 25 to 30-years old, thin build, dark hair and wearing a blue jean jacket and colorful scarf.

Anyone with information about the suspects is asked to contact the Carlsbad Police Department at (760) 931-2197.