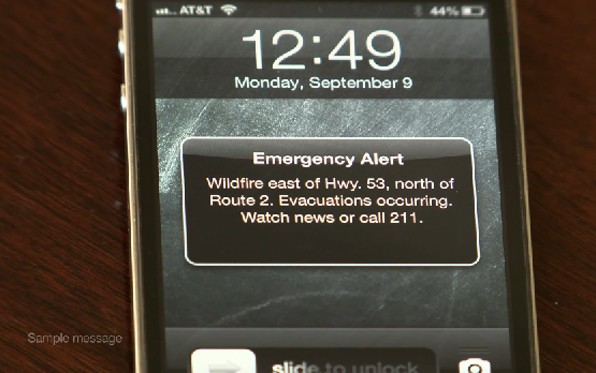 Wireless Emergency Alert system will notify residents of emergencies through their cell phones.

SAN DIEGO–County officials announced Monday they plan to use the Wireless Emergency Alert system to reach cell phones during emergencies.

The County Office of Emergency Services and the Sheriff’s Department recently gained the ability to use the new federal system, and while neither agency has used it yet, peak fire season is just ahead.

“The next time your phone makes that unique tone and vibration, please pay attention,” Board of Supervisors Chairman Greg Cox said. “It could be an alert telling you how to protect yourself and your family.”

Wireless Emergency Alerts will be used to notify people in a targeted area about nearby emergencies and actions they should take, such as evacuating or staying indoors. Cell towers in a targeted emergency area broadcast the alert directly to cellphones, and phones capable of receiving the transmission in that area will get it. So if a wildfire were spreading towards a neighborhood and the Sheriff’s Department needed to quickly evacuate people, it could send a message to cell phones in the evacuation area.

“These days, no matter what people are doing, they’re never far from their cell phones,” Sheriff Bill Gore said. “Wireless Emergency Alerts are a powerful tool that increases our ability to reach people with timely warnings.”

Wireless Emergency Alerts (WEA) compliment—but do not replace—other notification and information sources the County uses in an emergency, such as AlertSanDiego, the mass calling system that contacts listed and unlisted landlines and registered cell phones, or the television and radio broadcast Emergency Alert System.

But Wireless Emergency Alerts have some unique traits. They can target phones in a particular area, and people don’t have to register or take any action to get the alerts. That means tourists, residents and people new to the area like students or members of the military can get notifications on their cell phones, even if they never sign up to get emergency calls with AlertSanDiego.

However, everyone is still encouraged to register cell phones with AlertSanDiego; for one thing, there is no limit to the amount of information an AlertSanDiego call can carry.

In contrast, Wireless Emergency Alerts are just 90 characters. They will contain basic information about the emergency, actions people should take to protect themselves, and where people can get more information.

The WEA system was developed and is managed by FEMA, the Federal Communications Commission, and the major wireless companies. Most cellphones people purchased in the last two years are capable of receiving the alerts.

Information that came with the phone indicates if it’s WEA enabled. And, if you’re still not sure, the major cell carriers have online information about Wireless Emergency Alerts for their customers, and many of the carriers include lists of phone models that can get the alerts.

Most San Diegans are familiar with wireless alerts after the National Center for Missing and Exploited children used the WEA system last month to issue an Amber Alert in the Hannah Anderson abduction case.

WEA has been used by the National Weather Service to warn of localized flash flooding, but it wasn’t until the Anderson abduction case that a countywide alert was sent.  WEAs can be used for Presidential Alerts (a national emergency), Amber Alerts (child abduction cases) or emergency alerts.

Although the August Amber Alert raised awareness of the abduction and probably contributed to the San Diego County teen’s safe return, the sound of the alert, its timing, and the message itself caused some public confusion.

County Office of Emergency Services Director Holly Crawford says she’s concerned that last month’s alert might have prompted some people to disable Wireless Emergency Alert on their phones. She said the County will reserve the WEA system for serious emergencies, and she urged people to keep the alerts active.

This week, the Office of Emergency Services launched a campaign to educate the public about the importance of Wireless Emergency Alerts with a public service announcement that will run on several local television stations in the coming weeks (watch below).

Crawford said the message is simple.

“Your phone is with you all the time; now, with Wireless Emergency Alerts, it could save your life.”

More information on Wireless Emergency Alerts is at readysandiego.org/wea