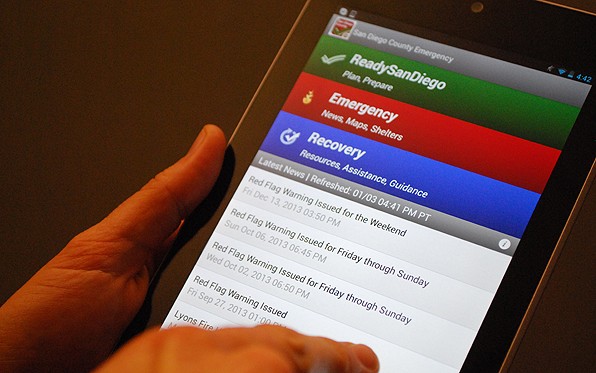 SAN DIEGO–Did you get a new smartphone or tablet for the holidays? Looking for the best new apps for the New Year?

A must-have app for every San Diegan is SD Emergency, the County’s free disaster preparedness and information app. Starting today, a significantly upgraded SD Emergency app with new features and clear improvements is available in the Apple App and Google Play stores.

“We’re asking all San Diegans to “Resolve to be Ready” in 2014, and the improved app makes it easy to keep that resolution,” said Supervisor Ron Roberts. “The new version has everything you need to prepare for disasters that affect San Diego, like wildfires, and users will find the new sharing capabilities, notifications and other features very compelling and useful.”

To encourage San Diegans to download the app and take other key preparedness steps, Supervisor Roberts and the County Office of Emergency Services today announced a giveaway promotion: The first 3,000 people to install SD Emergency, fill out the plan and register their cell phones or email addresses with AlertSanDiego, the County’s mass calling system, will earn a free two-person camping tent donated by Target.

SD Emergency is a unique local resource divided into three parts—“Ready,” “Emergency,” and the new “Recovery” — that lets San Diegans use mobile devices to prepare for disasters, stay informed throughout an emergency and get back on their feet afterwards. Features include:

Supervisor Roberts spearheaded the effort to create the County emergency app two years ago, and the Office of Emergency Services oversaw the development of SD Emergency and released the first version about 15 months ago.

SD Emergency aims to put critical, real-time information at users’ fingertips during a regional emergency. The app includes a detailed map and news updates from the County’s Emergency Operations Center about subjects such as road closures, evacuation areas and shelter locations. It also includes County, CAL FIRE, and other local social media feeds.

The region has not experienced a large-scale disaster since the app’s launch, but County information officers and emergency managers used the app and other tools in 2012 and 2013 to disseminate information to rural residents about wildfires that prompted evacuations and other emergencies.

“Fortunately, we’ve avoided a major wildfire like those in 2007 or 2003 since the app’s creation,” Office of Emergency Services Director Holly Crawford said. “Still, with this year’s near record drought and winter Santa Anas and the real possibility of large-scale fires every year in our region, we know it’s a matter of ‘when’ not ‘if.’ Mobile device users will turn to SD Emergency in the next regional disaster, and it will be an important resource.”

Details of the “Resolve to be Ready” promotion and links to download the app are atReadySanDiego.org.