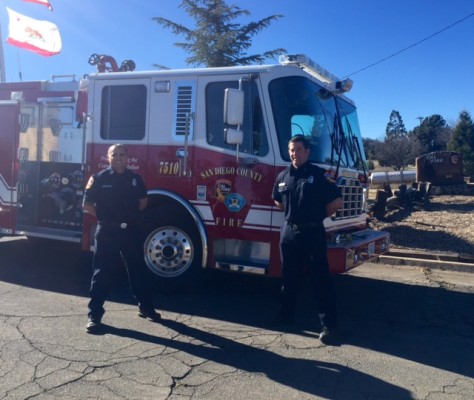 JULIAN–Julian residents and visitors now have around-the-clock access to paramedic engine service, thanks to an agreement reached among the region’s lead rural fire agencies and Julian fire officials.

The Julian Cuyamaca Fire Protection District (JCFPD) recently entered into a pact with the San Diego County Fire Authority to place a new paramedic engine staffed by CAL FIRE near downtown Julian. The upgrade builds on County and CAL FIRE efforts in recent years to raise the level of professional, 24/7 firefighter staffing across rural East County.

“This big boost in paramedic service is not only good news for Julian residents, but for all those who visit our beautiful backcountry each year,” said County Supervisor Dianne Jacob. “It’s great to team up with the Julian Cuyamaca Fire Protection District on this latest initiative to strengthen fire and emergency medical services in our rural areas.”

The improvement is part of a broader agreement recently struck between County Fire and the Julian district to bolster fire and emergency medical services.

Six professional CAL FIRE firefighters will staff the new engine, including a fire captain paramedic, two fire apparatus engineers and three firefighter paramedics. At least two will be on duty around-the-clock, including at least one paramedic.

They are trained and the engine is equipped to provide “Advanced Life Support,” meaning patients will be able to receive a sophisticated level of emergency medical services, such as a variety of medications, as well as IV and emergency cardiac equipment including EKG monitors, pacemakers and chest compression kits.

Julian Cuyamaca Fire Protection District Chief Rick Marinelli said he is “pleased to welcome this new resource to the community.

Firefighters from the JCFPD operate two other fire stations in the area. The addition of this paramedic engine will enhance fire protection and EMS to residents and visitors of Julian Cuyamaca. We will be better able to handle our increasing call volume with both our volunteers and CAL FIRE. This will raise the level of service and provide advanced life support to the area when the ALS ambulance is committed to other calls. We will also have faster response times and increased fire suppression capabilities. The addition of this fire engine will not only benefit residents and visitors of Julian – Cuyamaca, but the entire region.”

The Julian district’s Station 56 and 57, along with CAL FIRE’s Station 50, serve a 50-square-mile area that is home to about 5,000 people. Julian is a popular tourist destination for San Diegans as well as out-of-state visitors, with busy state Routes 78 and 79 leading into the area.

The upgrade in Julian is a key addition to County Fire’s comprehensive efforts to improve fire protection in the backcountry since it was created eight years ago.

“This places an engine in a strategic location that is going to help us respond more quickly to not only Julian but to nearby areas like Banner Grade, Shelter Valley and Cuyamaca,” Mecham said. “This could help save lives.”