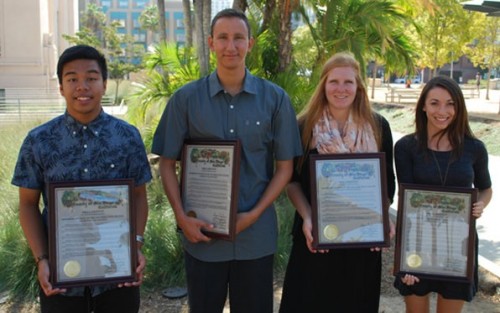 SAN DIEGO–Five high schoolers and one college student were recognized by the County Board of Supervisors for creating one-minute videos on suicide prevention and eliminating the stigma associated with mental illness.

UC San Diego student Courtney Loi won second place in Directing Change’s Student Film Contest, a statewide film competition, in the “Suicide Prevention” category. Her video, “From Me to You,” chronicles her battle with severe depression and how she overcame it.

Torrey Pines High School students Jessica Rose, Gabby Pacula, Madi Lombard and Diego Majewski’s video, “Let It Go,” tied for third place in the “Ending the Silence” regional category. Their video makes the point that they are more than the labels of their mental health disorder diagnosis. They tied for third place in the same category with Mira Mesa High School student David Nampi, whose video “Lost and Found” explains that when people reach out they could end up saving someone’s life.

“We wanted people to be aware of suicide prevention and how to help their friends if they are having thoughts of suicide,” said Nampi.

The videos were entered in Directing Change’s Student Film Contest, part of statewide efforts to prevent suicide, eliminate stigma and discrimination related to mental illness, and to promote mental health and wellness of students.

“We thought the subject was really interesting and the video turned out well,” said Pacula. “The students at Torrey Pines now know there is more support than they thought and that there are some people who care.”

For the past two years, Directing Change has partnered with the National Alliance on Mental Illness of California, the California Department of Education and many other programs to eliminate stigma associated with mental illness and raise awareness about suicide prevention.

“Programs like these are so valuable because they start a dialogue on a topic that is not often openly discussed,” said Chairman Bill Horn, County Board of Supervisors. “Knowledge is power and, in this case, can save lives.”

This initiative has resulted in more than 3,000 students statewide creating over 1,200 films focused on directing change in their communities. The videos have been viewed over 42,000 times throughout California.

“What is so unique about this film contest is that not only do the student filmmakers gain a deep understanding about the issues they portray, but by showing the films to their peers they help to raise awareness among the entire student body about suicide prevention and eliminating stigma of mental illness,” said Supervisor Dave Roberts.

To recognize the students’ achievements, the Roberts presented the winners with a proclamation and the Board declared August 4 “Suicide Prevention and Mental Health Stigma Elimination Day” throughout San Diego County.