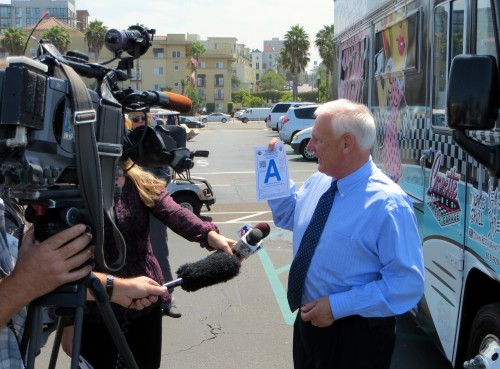 Chairman Ron Roberts speaking to reporters next to a food truck following the Board of Supervisors vote to require an A-B-C letter grading system for food trucks.

SAN DIEGO–The San Diego County Board of Supervisors today unanimously approved a program for assigning letter grades to the region’s expanding fleet of food trucks and other mobile food operators.

Supervisor Ron Roberts, who is serving as board chairman in 2012, first brought the idea of letter grades to his colleagues in February. At that time, the board unanimously directed the county’s Department of Environmental Health, the agency that regulates restaurants and mobile food operators, to develop an inspection program that included letter grades. It was this program, in the shape of an ordinance, that the board approved today.

San Diego is a hotbed of food trucks and the trend shows no signs of slowing. For example, a visitor to sdfoodtrucks.com will find a site ripe with information on the trend, offering everything from news on where the trucks are cooking to T-shirts that promote the movement.

Of the 1,100 mobile food operations that San Diego County now inspects through its Department of Environmental Health, 550 are in the business of preparing food for sale to the public. While the inspections ensure that operators comply with the highest levels of food safety, especially when it comes to refrigeration and preparation, the results were not prominently displayed for customers.

Supervisor Ron Roberts, chairman of the San Diego County Board of Supervisors, said the time was right for change to the same A-B-C system the public relies on for restaurant safety.

“With the growing culture of gourmet food trucks, now is the time to beef up the reporting by translating the inspection results into a grading system that consumers can easily access,” said Roberts. “Everyone deserves to know that the food they order is stored, prepared and presented in a manner that assures public health no matter if the restaurant has wheels or not.”

The county Department of Environmental Health worked closely with food industry representatives on developing the new procedures.Following board approval of the food truck ordinance, Roberts was met outside the County Administration Building by the operators of three food trucks: Deborah Scott with Patty Melt, Chicho Casillas with Chubby’s Food Truck and Rich Huarte and Jay Margolin with New York on Rye. Roberts and others toured the trucks and spoke with the operators, and DEH officials, about how the new regulations would be put in place.