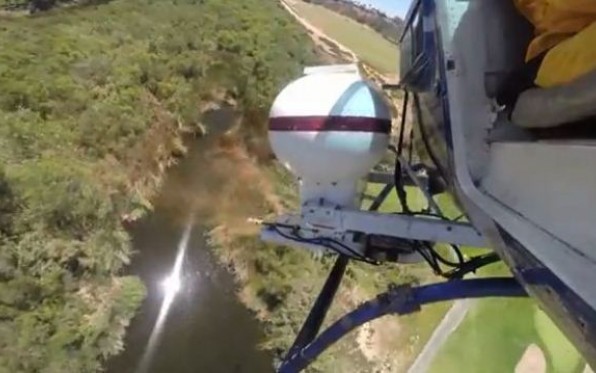 SAN DIEGO–With temperatures rising early this week and the West Nile virus season ahead, the County of San Diego plans to start its annual aerial drops of mosquito-fighting larvicide Wednesday on local waterways.

A helicopter drops granular larvicide on 48 waterways around the county roughly once a month from May through October each year to combat West Nile virus by trying to keep mosquito populations down.The larvicide doesn’t hurt people or pets, but kills mosquito larvae before they can grow into adult mosquitoes that can transmit West Nile virus and other diseases.

The rivers, ponds, and wetlands the County treats stretch from Chula Vista to Fallbrook and from Lakeside to Oceanside, and total just over 1,000 acres.

Residents also play an important part in prevention. County officials are asking the public to police their own backyards and dump out standing water to keep mosquitoes from breeding.

The mosquito species that are native to San Diego County and can transmit West Nile virus don’t need a lot of water in which to lay eggs, and can breed in people’s backyards. But the call for public help has taken on added importance because of the appearance of two invasive Aedes mosquito species in the last two years.

So far, only small numbers of the yellow fever mosquito and Asian tiger mosquito have been found here. And the diseases that they are best known for being able to transmit — dengue, chikungunya, yellow fever and the Zika virus — do not naturally occur here.

However, those two mosquito species love to live near people, not just in people’s backyards, but also inside their homes, and can breed in a thimble-full of water.

The Aedes species are different from San Diego County’s native mosquitoes in appearance and behavior. They’re smaller in size, have distinctive black and white markings, are known as aggressive biters and — unlike native mosquitoes that prefer to feed between dusk and dawn — like to bite and feed during daylight hours.

Report mosquitoes that match the description of the yellow-fever mosquito, or Asian tiger mosquito to Vector Control Program at (858) 694-2888, or vector@sdcounty.ca.gov.