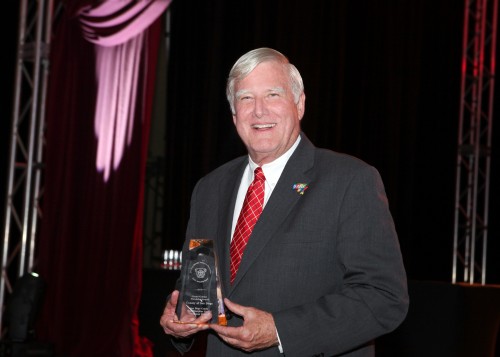 Supervisor Cox accepted the award and thanked County staff and numerous partners and supporters for the program’s success.

“Graffiti vandals are no longer getting away with defacing neighborhoods and sticking taxpayers with cleanup costs,” said Cox. “We’ve found a smart, efficient way to tackle a problem that affects every San Diegan.”

The program uses Graffiti Tracker, a web-based analysis and intelligence sharing service. When a graffiti incident is discovered, the vandalism is photographed using GPS cameras. The images are uploaded to a central information sharing database and compared with other graffiti incidents. This intelligence analysis provides valuable information on gang activity and allows for the prosecution of multiple acts of vandalism.

In January of 2011, under the leadership of Supervisor Cox, the Graffiti Tracker program was rolled out throughout the region. Previously, the program had only been used in the cities of Escondido and Oceanside, and by the Sheriff’s Department in the unincorporated area and in nine Sheriff’s contract cities.

The program was initially funded with support from Caltrans, SDG&E, AT&T and Cox Communications. The San Diego Association of Governments is scheduled to expand the program this summer to the 82 member agencies of its Automated Regional Justice Information System.