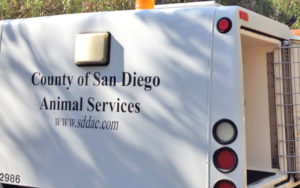 SAN DIEGO–County Animal Services is in the final weeks of transferring operations to six cities it has been serving under contract.

The County Board of Supervisors voted in March 2017 to let the contracts with the cities end when they expire on June 30.

Each of those cities has chosen to now contract with the San Diego Humane Society and S.P.C.A. County Animal Services has worked with the cities on the transition to their new service provider. As of July 1, if residents in the former contract cities have animal-related issues, they can call the Humane Society’s general number at (619) 299-7012 from 9 a.m. to 6 p.m. seven days a week.

Letters went out to residents in the contract cities who have current dog licenses for their pets advising them that their licenses will remain in effect until they expire and then residents can purchase a new one from the Humane Society.

Animal Services is already planning for the transfer of animals from the contract cities to the San Diego Humane Society with all city animals to be transferred by June 30.

The County shelter on Gaines Street in the Morena neighborhood belongs to the City of San Diego, so the County will move operations from there to the County’s two remaining shelters in Carlsbad and Bonita.

When the city contracts end, County Animal Services will continue to serve the unincorporated parts of the county.