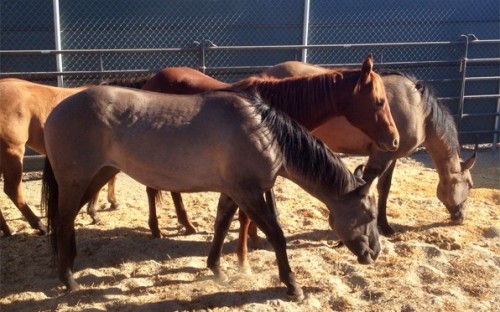 Animal Services Deputy Director Dan DeSousa said the horses appear to be healthy and could eventually be placed for adoption.

A federal Bureau of Land Management officer called Animal Services Sunday, saying that the horses had been running loose for a couple of weeks in the Cottonwood Campground in McCain Valley in Boulevard and that they had been able to corral them.

Animal Services officers immediately responded, but discovered that only one of the six horses was comfortable wearing and being led by a halter, making it impossible to load the remaining horses into trailers. Officers returned Monday, and with the help of the San Diego Humane Society, were able to coax the horses into trailers and take them to shelter in Bonita.

“While we don’t know who abandoned these horses,” DeSousa said, “they all look to be in fairly good health and their hooves are also in good condition.”

DeSousa said the animals would be housed at the department’s animal facility in Bonita until Saturday to see if an owner comes forward to claim them. If the owner does not claim them, he said, the horses will be made available for adoption.

The owner called Animal Services Wednesday morning to say the horses were hers and she took them back home that afternoon after paying the department’s fee to impound, house and feed the animals. The owner said she’s been having problems with people cutting her fences so that’s why the horses had been running loose.