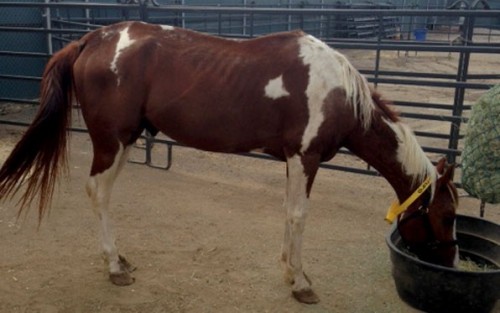 A neglected horse was rescued Friday by County Animal Services.

SAN DIEGO–County Animal Services rescued 10 horses from a property in Jamul Friday after they were found to be suffering from neglect.

Two others, a mare and her colt, were rescued last Saturday after the two were found in what animal control officers say was a life-threatening situation. Officers plan to take another three on Saturday.

The owner agreed Friday to relinquish 13 of the 17 horses still remaining on the property after the two were impounded last week. Animal control officers are now determining whether to submit the case to the District Attorney for criminal prosecution.

In all, 15 horses will be impounded. They include four stallions, two geldings (neutered stallions) and eight mares. All of them are underweight, and many have other medical issues.

The four horses remaining on the property were the healthiest animals but animal control officers will return to check on them.

The rescued horses will be housed at the County’s animal care facility in Bonita until they are healthy enough to be adopted.