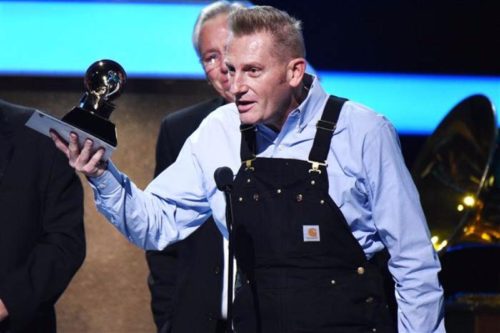 The couple received the award for Hymns (Gaither Music Group/Farmhouse Recordings), the first recording in nearly a decade to top both the Top Country and Top Christian Albums charts, according to Nielsen Soundscan.

Feek accepted the duo’s award and dedicated it to his late wife, Joey.

“My wife’s dream was to make a hymns album,” Feek said. “We sat together in the final days and watched this awards ceremony last year, and she said, ‘If we get nominated promise me you will come.’ I said, ‘I will,’ and she got a big smile on her face and she said, ‘Remember if we win, I’ll know before you will.’”

Hymns, the #2 top-selling country album in 2016, was among the Top 10 on the Country Music sales chart for 20 weeks and was in the Top 10 on the Billboard Top 200 for six weeks. The record, produced by Rory and Joe West (“When I’m Gone,” produced by Gary Paczosa), was in the Top 100 top-selling albums for the year across all music genres. The album was the top-selling Christian album for the year, and the Hymns video landed in the No. 1 spot on the Billboard Music Video chart and also on the Christian Music Video chart for months.

Hymns is exclusively distributed by Capitol Christian Distribution and is available throughout general market stores and the Christian marketplace in addition to online retailers including iTunes, Amazon, Walmart.com, crackerbarrel.com and www.gaither.com.

During the past few years, countless people have followed Joey+Rory’s journey on Rory’s blog, This Life I Live. The blog captured the couple’s love story and their walk of faith, through the birth of their daughter Indiana and Joey’s battle with cancer to the couple’s preparation for Joey’s passing in March of last year. In September, Rory compiled, edited and released a documentary of footage from the couple’s past two years, “To Joey, With Love,” released through Provident Films. On Valentine’s Day, he’ll release “This Life I Live” through Thomas Nelson; the book tells the story of his life as a young man and how his life changed when he met his wife.