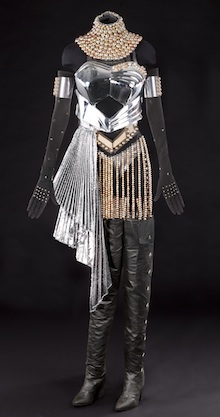 Whitney Houston’s “Queen of the Night” costume from the film, “The Bodyguard.”

Taking place in Los Angeles, The Dreier Collection will be auctioned off on July 28, the Animation Auction will be July 29 and the Treasures from the Hollywood Vaults auction has been moved to July 30 and July 31.

From Whitney Houston, her screen-used “Rachel Marron” “Queen of the Night” costume from “The Bodyguard.” Costume designer Susan Nininger penned the original design for this incredible “Queen of the Night” costume. Inspired by Maria, the Maschinenmensch (machine-human), in the 1927 Fritz Lang classic Metropolis, the Art Deco costume consists of a chromed thermal formed chest plate, a stylized corset with chrome and aluminum accents, a metallic gray undersuit with attached garter straps detailed with metal studs, silver lamé crepe skirt, pair of aluminum arm cuffs with chrome ball detailing, broad Egyptian-style collar festooned with chrome balls, a waist belt with attached strings of hanging chrome beads, a pair of gray over-the-knee high heel boots accented with metal diamond-shaped studs running down the sides of the legs and gray opera-length gloves with both metal and hematite beading. In the film there is a “Queen of the Night” music video playing on the back screen of the stage while Whitney is performing her number. Whitney also wore this costume when Kevin Costner’s character holds her (sans chest armor) in his arms following the stage incident—the very image used for “The Bodyguard” movie poster. One cannot find a better costume worn by Whitney Houston—one of the greatest musical performers of all time—at the peak of her storied career. Comes with a letter of authenticity from Chris Gillman. It is pictured above and expected to fetch $20,000 – $30,000.

Whitney Houston custom Fabrice Simon sequined gown worn at the 1988 Grammy Awards. This gorgeous sequined gown was designed by Fabrice Simon expressly for Whitney Houston to wear at the 30th Grammy Awards held on March 2, 1988. The black gown features sequined spaghetti straps with a floral motif bust line with related floral patterns throughout. At this ceremony Whitney won Best Pop Vocal Performance, Female for “I Wanna Dance With Somebody (Who Loves Me).” Whitney donated this gown for an AIDS Charity in 1992 and it is accompanied by a large 8 in. x 12 in. signed color photograph of Whitney wearing the gown holding her Grammy Award. On the surrounding photographer’s mat, Whitney has inscribed in silver ink, “Peace Help fight Aids Whitney” and has drawn a happy face to the right of her signature. Accompanied by the original “Sunday By the Bay” auction catalog (held July 12, 1992) featuring the Whitney evening gown as lot “L5A” as well as the original Federal Express airbill from “Nippy, Inc.” (Houston’s production company) sending the gown and signed photo to the charity. A fantastic gown, with exceptional provenance, worn early in Houston’s career for her second Grammy win. It is expected to fetch $3,000 – $5,000. Both of these Whitney Houston costumes are a part of the Tresasures from the Hollywood Vaults.

Also from the Hollywood Vaults, Britney Spears stage-worn sequined catsuit from her “Oops!…I Did It Again” performance at the 2000 Grammy Awards. This ornate, custom-made sequined catsuit was worn by pop star Britney Spears at the 42nd Annual Grammy Awards in 2000 while performing her iconic hit “Oops!…I Did It Again.” The red catsuit is literally covered with sequins and exhibits tailoredlateral “hourglass” cut-outs at the midriff to accentuate her physique. Britney wore this costume during the dress rehearsal as well as her main performance at the Grammy’s on February 23, 2000. The iconic costume was personally donated by Britney Spears for The Britney Spears Foundation and is accompanied with a signed letter of authenticity by Spears. This is an incredible stage-worn costume worn during Britney’s meteoric rise to fame. It is expected to fetch $8,000 – $12,000.

From The Dreier Collection, Britney Spears’ screen-used Circus music video dance costume, pictured above. In the music video for her 6th studio album, “Circus”, pop-princess Britney Spears wears this exceptional ensemble as she dances and sings her way through the entire big-top themed performance of the title track. This sleek signature costume includes vintage, black sequined dance shorts, a Vivienne Westwood white satin corset, vintage black Berman’s studio dance tuxedo tailcoat, an additional pair of black dance shorts (not used in the production), and a vintage top hat. This costume is highly visible throughout the video and in excellent condition. It is expected to fetch $6,000 – $8,000.

Jennifer Lopez’s “Dr. Catherine Dean” signature costume by Eiko Ishioka from “The Cell.” Lopez plays “Catherine Dean”, an experimental psychotherapist enlisted by the FBI to track down a killer by entering his thoughts. This is a signature costume worn by Jennifer Lopez in some of the movie’s most surrealistic scenes. Designed by the late, Academy Award winner Eiko Ishioka, consisting of a long, sheer, black lace dress, accessorized with metal-flake crimson, anatomical collar with velcro closure and metal hoop in back of neck. Also included a wraparound metalized resin facemask with hooped, braided chain veil, which you can click to see. A long black and maroon accented wig completes this stylish collection. This costume is a part of the Hollywood Vaults, is pictured below and is expected to fetch $3,000 – $5,000.