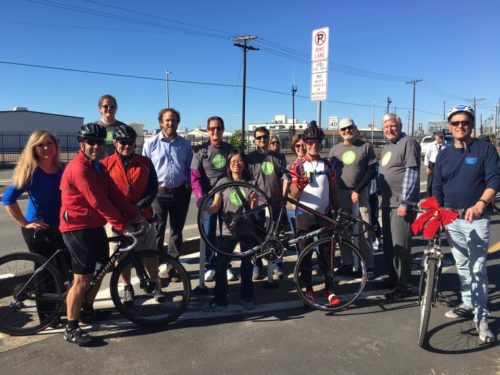 Bicyclists at the groundbreaking ceremony of the new Bayshore Bikeway. Courtesy photo

SAN DIEGO–Elected leaders and bike riders came together on Sunday morning to break ground on a new 2.25-mile segment of the Bayshore Bikeway, which will eventually loop 24 miles around San Diego Bay.

“We are making great progress on completing the Bayshore Bikeway in the next four years, and this new segment gets us one turn of the wheels closer,” said County Supervisor Greg Cox, chair of the SANDAG Bayshore Bikeway Working Group. “The Bikeway is great for cyclists who want to have fun and exercise, and it will be a corridor for thousands of people who work at industries along the bay, such as Naval Base San Diego, the shipyards, and tourism-oriented businesses.”

To date, 15 miles of the bikeway – more than half of the loop – have been completed, enabling bike riders to take in some of the most scenic bayfront views through Coronado, Chula Vista, Imperial Beach, National City, and San Diego.

Located entirely in the City of National City, the new segment will extend from just south of Vesta Street (the border between San Diego and National City) to the intersection of Marina Way and West 32nd Street at the National City Marina. Completion is expected in summer 2017.

The project will build one mile of Class I bikeway – a physically separated path for bike riders. The remainder will be a mix of Class II bike lane with street striping and Class III bike route with signage to designate shared use.

To the north of this future segment is a 0.6-mile extension of the Bayshore Bikeway, which was completed in 2015 along Harbor Drive between 32nd Street and Vesta Street in San Diego.

As part of its commitment to make the San Diego region more bike-friendly, SANDAG has made it a priority to finish the Bayshore Bikeway and several other major bikeways throughout the county. In 2013, the SANDAG Board established the $200 million Regional Bike Plan Early Action Program to accelerate bike projects. The goal is to create a network of regional bikeways that will make riding a bike a convenient choice for everyday travel.

Construction of this portion of the Bayshore Bikeway will cost approximately $1.7 million. Funding sources include: the TransNet regional half-cent sales tax for transportation, a grant from the California State Coastal Conservancy, and federal Transportation Enhancement funds.

MTM Builders Inc. based in Chula Vista has been selected as the contractor.