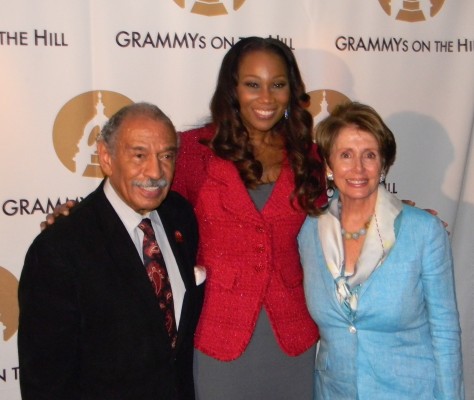 WASHINGTON — The Recording Academy honored the Library of Congress, OSCAR and GRAMMY winner, philanthropist, best-selling author, and a proud mother, Jennifer Hudson, with special awards at its annual festive April 17, 2013 GRAMMYs ON THE HILL Awards show, which was held at The Hamilton, a prestigious restaurant and entertainment venue in downtown Washington, DC.

Emmy, Golden Globe, and Soul Train Music Award winning composer and bandleader, Terence Blanchard, presented a special award to representatives of the York Community High School of Elmhurst, Illinois, which was recognized as one of the two 2013 GRAMMY Signature Schools Gold recipients of $5,500 each to enhance its performing and cultural arts programs.

The Recording Academy was joined by a host of who’s who of Congressional members, entertainers, and recording industry movers and shakers, in bestowing recognition on the Library of Congress under the leadership of the Librarian of Congress, Dr. James H. Billington, for its work over the past decade to preserve historic audio recordings with the creation of the National Recording Registry. 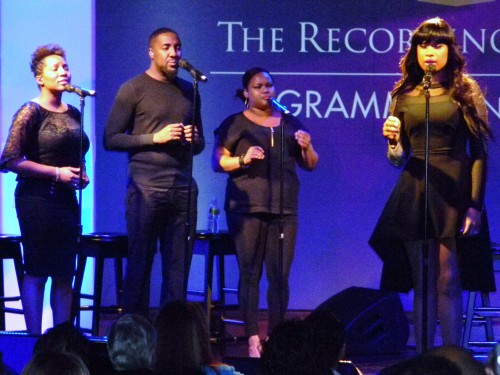 The 83-year-old Librarian of Congress, Dr. Billington, said he was delighted that the Library’s preservation work was being honored because it shows that the American people care about preserving our cultural history.

“The fact that I can’t even carry a tune, and I am being awarded a GRAMMY award is amazing in itself…but most importantly – this award is not for me but is in recognition of all the hard work the staff at the Library does every day in educating the American people of its rich cultural and artistic pieces of literature and music stored at the Library of Congress,” he told San Diego County News. 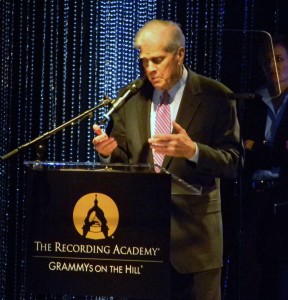 Dr. Billington said preservation of the nation’s cultural heritage is one of the most neglected issues. “We are kind of a throw-away society,” he said. “We’re tremendous at creating things in this country with our freedoms and our richness and variety of forms of cultural expression, but we seem to think things will last forever.”

Songwriter Angela Hunte agreed with Dr. Billington and said the Library’s preservation work is critical. “These are American songs and literary artifacts which are going to be played and reminisced for generations to come,” she emphasized.

“When I am long gone, future generations will be able to listen to and see the artists performing classics such as This Land is My Land, Thriller, Somewhere Over the Rainbow, and Dr. Martin Luther King’s I Have A Dream speech.”

The Grammy Foundation pushed for legislation in Congress more than 10 years ago to create the preservation program at the Library of Congress. So far, 375 audio recordings have been preserved through the program for their historic, artistic or cultural significance. This year’s inductees include Simon and Garfunkel’s album “Sounds of Silence” and Chubby Checker’s dance hit “The Twist.”

The recordings are housed at the Library’s Packard Campus for Audio Visual Conservation built partially in a bunker in Culpeper, Virginia. The facility houses more than 6 million items, including about 3.5 million sound recordings.

The 31-year-old Hudson, who accepted the Recording Academy’s Recording Artists’ Coalition Award, said being recognized for her charitable work stands apart from all her other awards because it honors her late mother, Ms. Darnell Hudson Donerson, her brother, Jason Hudson, and nephew, Julian King.

“It makes it the most prestigious award to be acknowledged for trying to make a difference,” Hudson commented to San Diego County News. “When I lost my mother, brother and nephew so violently in 2008, I had to do something that would further their memory and at the same time do good for the community at large.”

The Recording Academy President and CEO, Neil Portnow, said Hudson has stood out for supporting her own charities, as well as the Grammy Foundation and its work from the onset of her successful singing career.

“She is an amazing singer, of course, an amazing actress as well, but also really a wonderful and loving philanthropist who truly cares about people,” Portnow said.

After accepting her award, Hudson performed “Hallelujah” and applauded efforts in Washington to keep music education alive in schools. She said that made all the difference for her, long before American Idol and her Oscar and Grammy Award.

Chief Creative Officer, Sony Music Entertainment Worldwide, Clive Davis, who presented the Recording Artists’ Coalition Award to Hudson, said he wanted people to know about her heart and her talent: “Hudson is still a new artist, and her upcoming third studio album will be special and I think it will go gold and platinum all the way,” Davis predicted.

Some of music’s biggest names were in Washington at The Hamilton to play tribute to Hudson. Cellist Zoë Keating moved the audience with her rendition of the National Anthem, which was in memory of the victims of the Boston Marathon bombings. Songwriters Angela Hunte (Jay-Z and Alicia Keys’ “Empire State of Mind”), Victoria Shaw (John Michael Montgomery’s “I Love the Way You Love Me”), and “American Idol” judge Kara DioGuardi (Pink’s “Sober”) each performed one of their own hits along with a classic from the Great American Songbook.

At the near end of the evening, Hudson wowed the crowd with an acoustic performance of Leonard Cohen’s “Hallelujah” and “One Night Only” from Dreamgirls, the role for which she won an Academy Award in 2007. 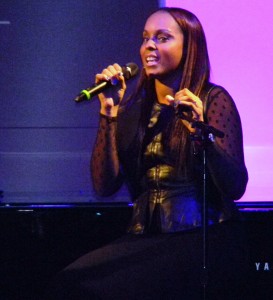 2013 GRAMMYs ON THE HILL Advocacy Campaign

Recording Academy President Neil Portnow said hundreds of musicians visited Capitol Hill on Thursday, April 18 to urge lawmakers to protect copyrights for the creators of music and ensure they get paid for their work in the digital age.

The annual GRAMMYs ON THE HILL Awards is meant to connect the music industry with the world of policy and politics in Washington.

Portnow stated: “This year, we decided to use the theme ‘American Music: Creation is Innovation’ to educate legislators about what they can do to protect today’s music creators and to prepare the next generation of music innovators.”

Daryl P. Friedman, the Recording Academy’s Chief Advocacy and Industry Relations Officer in Washington, said “many different voices are calling for an update to the copyright law, and earlier this year the U.S. Register of Copyrights laid out a vision that we all agreed with.”

“Legislators should remember that creators are the key players in the conversation, and copyright is the engine that drives innovation in our economy and our culture,” stated Friedman.

Musician and songwriter, Darrell Brown, told San Diego County News: “Now more than ever, Congress is looking anew at how music creators are compensated for their work and how that work is distributed.”

At two separate Congressional hearings last year, members of The Recording Academy testified about music licensing in the digital age and the continued need to establish a performance right in terrestrial radio.

According to Recording Academy officials, terrestrial radio is the only broadcast platform that does not compensate performers and record producers when their sound recordings are played.

“Ironically, every other industrialized country except the United States provides a broadcast performance right, which cost the American economy and artists hundreds of millions of dollars in foreign royalties that are never paid – and that has to stop,” Portnow emphasized.

For additional information on how you can get involve with GRAMMYs ON THE HILL advocacy initiatives, go to the following websites: www.grammy.com/advocacy, and www.facebook.com/GRAMMYsOnTheHill.