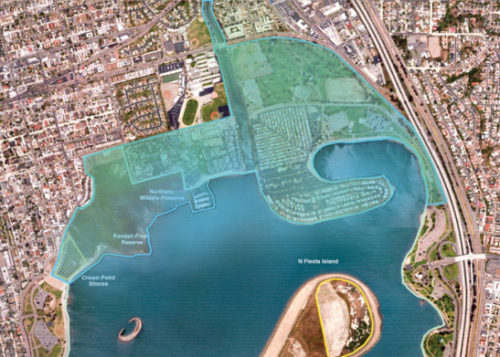 SAN DIEGO–ReWild Mission Bay – a project of San Diego Audubon and its partners to enhance and restore wetlands in the North East corner of Mission Bay– released the final conceptual plans for how wetlands can be feasibly restored to protect wildlife and the San Diego county communities. The three plans include expanded public access and habitat restoration options, as well as cost estimates and sea level rise modeling.

“What is so exciting about this effort is how involved the community has been from the beginning, helping our consultant team develop the restoration plans from the ground up,” said Rebecca Schwartz Lesberg, project manager for ReWild Mission Bay. “These aren’t just our suggestions- this is what the community has asked for. People have been vocal about their support for finding a way to restore and protect this piece of San Diego’s coastline, and ReWild Mission Bay provides that path forward.”

The plans, and all of the analysis that went into them, will be presented to the public at workshop on December 6 at Mission Bay High School.

The full report describes the existing and historical land use and environmental conditions of Mission Bay, what the opportunities and constraints are to restoring wetlands, and analyzes how each of the final plans stacks up in achieving the goals of ReWild Mission Bay. The report, and the detailed restoration plans it includes, is the result of more than four years of public engagement, including four workshops attended by hundreds of community members.

The project’s Wetlands Working Group Steering Committee, including the California State Coastal Conservancy, the US Fish and Wildlife Service, and the University of California’s Natural Reserve System led the process collaboratively with restoration professionals at Everest International Consultants and San Diego Audubon staff and volunteers.

The effort also involved close coordination with an expert Science and Technical Advisory Committee, which included scientists from Scripps Institution of Oceanography and Tijuana River National Estuarine Research Reserve, as well as staff from the City of San Diego’s Planning, Parks and Recreation, and Transportation and Stormwater Departments, among others. “Rarely has a planning process in the City of San Diego involved such collaborative efforts between scientists, conservationists, and the community,” said Schwartz Lesberg.

Wetlands — including marshes, mud flats, creekbanks and more — play an important role in San Diego’s quality of life, as they attract wildlife, foster a diverse ecosystem, improve water quality and protect communities from flooding by providing a cushion during high tides. Today, only five percent of the historic 4,000 acres of Mission Bay wetlands remain, making ReWild Mission Bay a critical and time-sensitive project for the area.

Chris Redfern, executive director of San Diego Audubon, highlighted the value of having City of San Diego support for the effort, which has been part of the Mission Bay Master Plan for decades.

“We are excited to work with the City and all of our partners to see this vision implemented. This is the only way to protect the bay’s few remnant wetlands, which provide crucial habitat for wildlife, from disappearing in the coming years due to sea level rise,” Redfern said.

At over 350 pages long, the Feasibility Study Report provides detailed information on restoration alternatives and the process used to generate them. San Diego Audubon and the ReWild Working Group will host a final public workshop on December 6 from 4 to 7 p.m. at the Mission Bay High School cafeteria to present the findings of the study and outline future efforts to make wetlands restoration in the northeast corner of Mission Bay a reality.

“For the first time in half a century, the public has the opportunity to weigh in on how these public lands are used. And it is probably our last chance to do so before we see some of the most damaging impacts of climate change. It’s our responsibility to make sure our children and grandchildren have a chance to enjoy nature, and experience the protections wetlands provide for our communities,” said Redfern.

“Over the past century, Mission Bay has been converted from a rich natural treasure into a heavily developed recreational area,” said Julia Elkin with the California State Coastal Conservancy, who also served on the ReWild Working Group. “ People have lost the opportunity to really experience nature along the shoreline in Mission Bay. This is an unprecedented opportunity to restore a small piece of what was lost.”

The workshop will be an opportunity for the public to learn about the results from the ReWild Mission Bay Wetlands Restoration Feasibility Study, including seeing up close details of the plans they helped create. The ReWild project teams will be on hand to answer questions. From there, next steps include integration of these plans with the City’s ongoing land use and development plans for the area, environmental review, permitting, and restoration of the area’s wetlands.