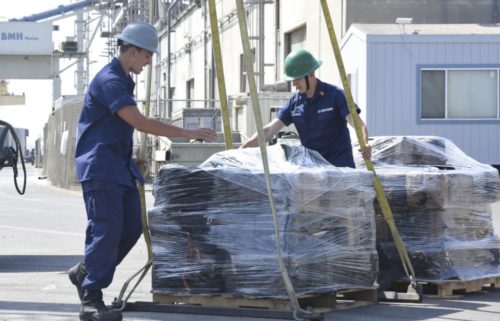 Crews from the cutters Steadfast and Alert interdicted the drugs from four suspected smuggling vessels between late June and mid-July. Steadfast’s crew was responsible for two interdictions totaling approximately 5,450 kilograms and Alert’s crew seized some 2,392 kilograms in two seizures.

“I continue to be impressed by the dedication and tenacity of the crews aboard our cutters and the difficult, dangerous missions they perform,” said Cmdr. Alain Balmaceda, commanding officer of the Steadfast. “Their hard work means two things. First, more than eight tons of cocaine won’t reach our streets and add to the drug-related deaths and health problems facing our nation. And second, hundreds of millions of dollars are being denied to transnational criminal organizations who spread instability, death and despair wherever they operate.”

Numerous U.S. agencies from the Department of Defense, Department of Justice and Homeland Security cooperated in the effort to combat transnational organized crime. The Coast Guard, Navy, Customs and Border Protection, FBI, Drug Enforcement Administration and Immigration and Customs Enforcement along with allied and international partner agencies play a role in counter-drug operations. The fight against transnational organized crime networks in the Eastern Pacific requires unity of effort in all phases from detection, monitoring and interdictions, to criminal prosecutions by U.S. Attorneys in districts across the nation.

The Coast Guard increased U.S. and allied presence in the Eastern Pacific Ocean and Caribbean Basin, which are known drug transit zones off of Central and South America, as part of its Western Hemisphere Strategy. During at-sea interdictions in international waters, a suspect vessel is initially detected and monitored by allied military or law enforcement personnel coordinated by Joint Interagency Task Force-South based in Key West, Florida. The law enforcement phase of counter-smuggling operations in the Eastern Pacific is conducted under the authority of the 11th Coast Guard District, headquartered in Alameda, California. The interdictions, including the actual boardings, are led and conducted by members of the U.S. Coast Guard.

Steadfast and Alert are both 210-foot medium endurance Reliance-class cutters based in Warrenton, Oregon.