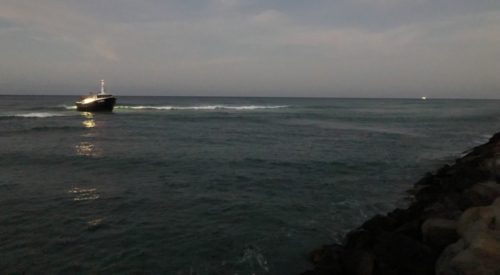 HONOLULU–The Coast Guard is investigating the cause of a fishing vessel grounding off the Honolulu Airport, on Wednesday.

Coast Guard crews and salvors from Cates Marine responded to the grounding Wednesday morning, the vessel was successfully refloated, and the Coast Guard is investigating the cause of the grounding.

The case has also been referred to the State of Hawaii Department of Health – Hazard Evaluation and Emergency Response Office and the Department of Land and Natural Resources for pollution and environmental assessment in the vicinity of the grounding.

About 30 minutes past midnight Sector Honolulu watch standers received a report from the master of the Sea Goddess, an 83-foot Honolulu-based longliner, they were aground about 150-yards from the middle runway at Honolulu Airport with six people aboard.

A 45-foot Response Boat-Medium crew from Coast Guard Station Honolulu was launched to assist, and pollution investigators arrived on shore to assess the situation. An Air Station Barbers Point MH-65 Dolphin helicopter crew also conducted an aerial assessment. Cates Marine was hired by the owner to refloat the vessel and by 9:30 a.m. the vessel was free. It will be towed into the Port of Honolulu and inspected before being allowed to return to service.

There are no reports of injuries or pollution released. The maximum pollution potential of the vessel is 10,000 gallons of diesel fuel, 75 gallons of lube oil, and oily water mix. The weather at the time of the grounding was reported as clear skies with 4-foot seas and 15 mph winds. The crew was not in danger and remained aboard the vessel.

The cause of the grounding is under investigation.