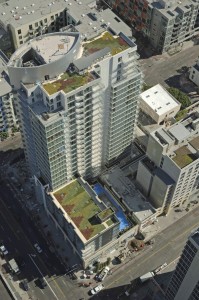 Called “Centre City Green,” the program is under development by the Centre City Development Corporation (CCDC), working on behalf of the Redevelopment Agency for the City of San Diego. The program builds upon Mayor Sanders’ agenda for water conservation, energy innovation, and clean technology to ensure the city’s long-term environmental sustainability for future generations.

The program also includes new lighting strategies for the Centre City and a pilot program to create new “green” streets throughout downtown.

According to Sanders, with the adoption of the State’s new CalGreen building codes in January 2011, California will already have some of the most stringent environmental building standards in the country.

“We want to reward those developers who exceed California green building standards and to build in flexibility so that ‘green’ solutions can be customized for different types of buildings ranging from hotels, to condos, to offices,” said Sanders.

The Earth Day announcement was made at Strata, a new, 24-story luxury apartment tower slated to be the first LEED Silver-certified residential high-rise in the City of San Diego.

Developed by The Hanover Company of Houston (go here if you want to view other images of them), Strata meets the guidelines for more rigorous Silver certification under the U.S. Green Building Council’s LEED rating program for its sustainability measures including the use of landscaped “eco roofs,” services of which are provided by these guys. Strata and its neighbor, the LEED-certified Hotel Indigo, were two of the first projects to use CCDC’s incentive program that allow developers to add additional square footage to their projects in exchange for installing landscaping on their roofs. The roof-top plants, as noted by https://primeroofingfl.com/metal-roofing-benefits/, serve as a natural insulation, thereby reducing the building’s energy usage for heating and cooling. They also help to improve downtown air quality.

“Building ‘green’ and renovating downtown’s older buildings are critically important,” Faulconer added, “because an estimated 40 percent of carbon emissions in the U.S. come from buildings.”

Faulconer announced that as part of Centre City Green, CCDC is developing a comprehensive Lighting Master Plan that will provide new energy efficient lighting strategies for buildings, streets and sidewalks throughout downtown. He acknowledged SDG&E for donating more than $100,000 to fund lighting innovations through the plan.

CCDC hopes to recognize and promote those buildings that excel as models of ‘green’ development by issuing a local a Centre City Green plaque or “seal of approval” to raise awareness in the public, said CCDC chairman Fred Maas.

“Most important,” Maas added, “these programs will have specific performance measures so we can quantify our success in meeting or exceeding State goals for improving air and water quality, reducing our water and energy consumption, and lowering greenhouse gas emissions.”

Maas noted that the Centre City Green program is still in the planning stages and that the agency would focus in coming months to determine which incentives will be most effective in encouraging private sector participation.