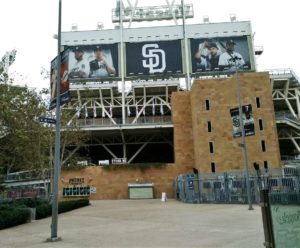 The stretch of Park Boulevard between Imperial Avenue and Tony Gwynn Drive will be officially changed to Trevor Hoffman Way on Friday, Sept. 28, before the final home stand of the 2018 Padres season.

“As one of the best closers in baseball history and a legendary member of the Padres, we couldn’t be more thrilled to honor Trevor Hoffman for his contributions to the game, his entry into the Baseball Hall of Fame, and the joy he has given so many San Diego fans,” said Mayor Kevin Faulconer. “It’s especially fitting that his street will connect with Tony Gwynn Drive so the longtime teammates will share an intersection outside of Petco Park.”

Following his 19-year career in Major League Baseball, Hoffman was inducted into the National Baseball Hall of Fame in Cooperstown on July 29. He set a National League record with 601 saves – including 552 during his 16 years as a member of the Padres. He joins Tony Gwynn and Dave Winfield as Padres in the Hall of Fame.

“We’re thrilled that Padres fans will forever be able to visit the iconic intersection of Trevor Hoffman Way and Tony Gwynn Drive at Petco Park,” said Padres Executive Chairman Ron Fowler & General Partner Peter Seidler. “They are two of the greatest individuals to ever wear a Padres uniform, and we’re thankful to the City of San Diego for recognizing their contributions to America’s Finest City.”

The Padres submitted the application to rename the street two days after Hoffman was inducted. The Padres are covering all costs associated with the signage.