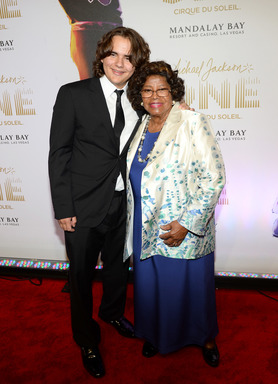 Prince Jackson and Katherine Jackson arrive at the world premiere of “Michael Jackson ONE by Cirque du Soleil” at THE hotel at Mandalay Bay on June 29 in Las Vegas. Photo: Ethan Miller/Getty Images for Cirque du Soleil.

Directed by Jamie King, this entirely new show is the second creative project to be developed between Cirque du Soleil and The Estate of Michael Jackson after the top grossing Michael Jackson The Immortal World Tour, currently playing arenas in Asia as it travels the world.

Michael Jackson ONE is a sonic, tonic fusion of acrobatics, dance and visuals that takes the audience on an immersive journey through the music and spirit of Michael Jackson.

Driven by Michael’s powerful, multi-layered music – heard like never before in a riveting, state-of-the-art surround-sound environment – ONE takes the audience through a series of seamless visual and musical tableaux, at the heart of a world that is in turn majestic, playful, magical and heart-warming.

In Michael Jackson ONE, Michael’s artistry and spirit are expressed through the vibrant energy of the cast of 63 dancers and performers, underscored by aerial performance, driving acrobatics, and vivid choreographies that use the urban/hip hop idiom as a springboard for exploration.

ONE is a heartfelt tribute to the work, innovative spirit, and legacy of Michael Jackson – the King of Pop, the genius, the visionary, the One.

Michael Jackson believed that all people are unique and equal, regardless of race or culture. His message was one of unity, harmony and hope for a better world. At once evocative and enigmatic, the name Michael Jackson ONE also presents a paradox: Michael was a multifaceted artist who strove to fuse together various musical styles and art forms.  It is a fitting title for a unifying journey into the world of the King of Pop, the genius, the visionary, the One.

Along with Jamie King—who started his career as a dancer on Michael’s Dangerous World Tour and also directed the arena touring show Michael Jackson The Immortal World Tour by Cirque du Soleil— Michael Jackson ONE will bring together the creative minds behind the Michael Jackson Estate, John Branca and John McClain.

Michael Jackson ONE is Cirque du Soleil’s 8th production in Las Vegas since Mystère in 1993. The company has brought wonder and delight to more than 100 million spectators in more than 300 cities on six continents. Cirque du Soleil has 5,000 employees, including more than 1,000 performing artists from close to 50 different countries.