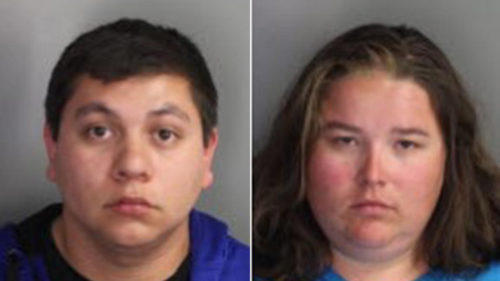 Investigators arrested 22-year-old Brittney Lyon and her boyfriend, 22-year-old Samuel Cabrera, Jr. for multiple felony counts that included conspiracy and lewd and lascivious conduct with a child under the age of fourteen. Both were booked into the Vista Detention Facility where Lyon’s bail was set at $100,000 and Cabrera’s bail was set at $2.3 million.

The investigation has identified two 7-year-old female victims, one from Oceanside and one from Escondido, and investigators believe there might be additional victims.

Carlsbad police Tuesday received notification from Oceanside police that they had been made aware of child molestation that had reportedly occurred in Carlsbad. During the investigation, detectives learned that one of the suspects, Lyon took children that she was babysitting to a home in the 6300 block of Greenhaven Drive that was occupied by Cabrera. At the residence, Cabrera reportedly engaged in sexual molestation of the children while Lyon filmed the acts.

“We are equally disturbed and outraged that adults would victimize children in this way,” commented Police Chief Neil Gallucci. “The safety and welfare of children are our top priority and we are committed to presenting a comprehensive case to the District Attorney’s Office.”

The Carlsbad Police Department is asking for the public’s assistance. Anyone who has information related to any potential illicit activity by Lyon or Cabrera is asked to call the Police Hotline at (760) 931-2293.