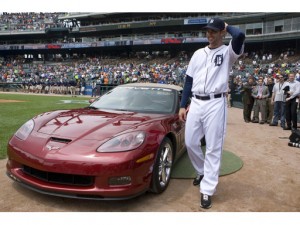 The 27th and final batter, Jason Donald, hit a routine ball in the hole between first and second base. Tigers’ first baseman Miguel Cabrera fielded the ball and threw to Galarraga, who stepped on first base, apparently before Donald touched the base and was called safe.

GM North American President Mark Reuss, who presented a Chevrolet Corvette to Galarraga at the game against the Cleveland Indians, said the way the pitcher had handled the incredible events deserved to be recognized regardless of what record books would ultimately show.