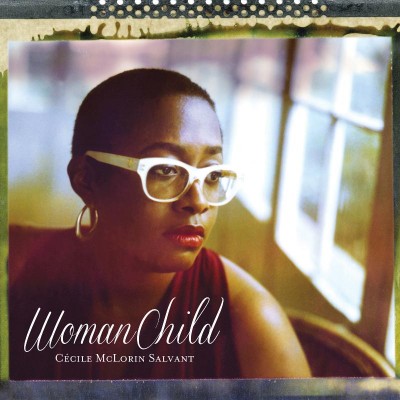 LOS ANGELES – Singer and song stylist Cécile McLorin Salvant’s CD, WomanChild, to be released on May 28, 2013 on the Mack Avenue Records label, is her much anticipated professional recording debut on a major record label and formally introduces her to an international music audience. The 12-tracks repertoire of splendid and spell-binding songs Cécile chose to perform on the CD are searing, burning, and intense – not to mention swinging. Undoubtedly, WomanChild will quickly propel McLorin Salvant as one of the most promising song stylists and top singers this century has produce in quite some time.

This talented 23-year-old winner of the 2010 Thelonious Monk Institute of Jazz Vocal Competition, who resides in Miami, brings to the world stage a seasonally trained and gifted voice which is the most prolific of any of her fellow peers of her generation. Although there seems to be an upsurge in jazz singing since the ushering in of the new millennium of 2000, the past 12 years has seen female singers from all nationalities and age groups come out of nowhere, like all revolutions it had been fermenting for quite some time.

Just as their age range is wide, young women jazz singers of late also have a great stylistic diversity as well. But Cécile McLorin Salvant’s work on this album is at an extremely high quality. Almost all of her selections are not just more than competent, but they are expertly sung and orchestrated jazz-blues treatments of standards, contemporary hits, and show tunes old and new.

When Billie Holiday, Sarah Vaughan, and Ella Fitzgerald, known in the jazz critic world as The Big Three, first made their professional debut no one heard anything as unique and startling as these sophisticated ladies. Cécile has the confidence, discipline, poise, class, and the chops to join this distinctive rank of women as she progresses even more in the coming years ahead. But in the meantime this young lioness is just getting started!

Listen to slices of emotions she pours out so powerfully in You Bring Out The Savage In Me, an original tune by Sam Coslow made famous and labeled as controversial and racist when it was sung and performed in the 1930s by African-American entertainer Valaida Snow; Cécile’s enthralling rendition of Harry M. Woods’ What A Little Moonlight Can Do will have you with your mouth hanging open; and the Nobody track is a popular song with music by Bert Williams and lyrics by Alex Rogers, published in 1905. The song was first publicly performed in February 1906, in the Broadway production Abyssinia. Cécile, like great song stylists as Nancy Wilson and Carmen McCrae, took the melody lines and rewrote them in such a brilliant fashion that it actually improves on the classic. 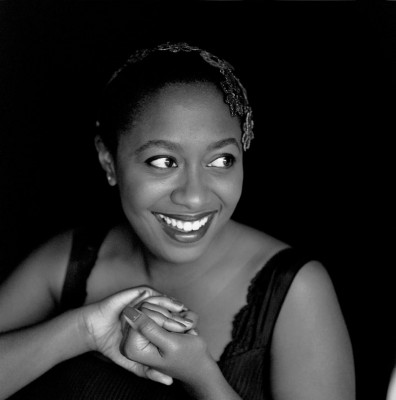 Cécile McLorin Salvant is one of the most promising song stylists and top singers this century has produce in quite some time. Profile photo courtesy of Mack Avenue Records.

Cécile was born and raised in Miami, Florida of a French mother and a Haitian father. She started classical piano studies at 5, and began singing in the Miami Choral Society at 8. In a telephone interview from her Miami home, Cécile stated that early on thanks to the “wise and careful guidance” of her parents, she developed an interest in classical voice, began studying with private instructors, and later with Edward Walker, vocal teacher at the University of Miami.

In 2007, Cécile moved to Aix-en-Provence, France, to study law as well as classical and baroque voice at the Darius Milhaud Conservatory. It was in Aix-en-Provence under the instructions of the incomparable reedist and music teacher Jean-François Bonnel, that she started learning about improvisation, instrumental and vocal repertoire ranging from the 1910s on, and sang with her first band.

Jean Francois Bonnel’s influence on Cécile runs deep and she credits him on her WomanChild CD for the professional nurturing and private lessons he taught her about intonation, diction, pitch variations, and other important aspects of singing jazz and the blues.

“Jean Francois Bonnel taught me an invaluable lesson and that is to some extent it is necessary and desirable that in addition to technique, a singer must have some knowledge of their physical being in order to exercise the necessary control over those parts of the body that produce vocal sound,” Cécile explained.

She also shared how her parents were instrumental in steering her in the direction of music: “I can remember at a very early age hearing different kinds of music growing up. There was Ella Fitzgerald, Ethel Waters, Billie Holiday, Duke Ellington, Sarah Vaughan, opera, Broadway, Haitian and classical music as well as blues and R&B.”

In 2009, after a series of concerts in Paris, she recorded her first album Cécile, with the Jean-François Bonnel’s Paris Quintet. The album is really a prelude to WomanChild and highlights Cécile’s brilliant vocal capacity and the masterful orchestration of the illustrious Jean-Francois Bonnel. After completing this successful endeavor — a year later in 2010, Cécile won the Thelonious Monk vocal competition in Washington D.C., thanks in large part because of the encouragement and support of her mother and Francois Bonnel.

In WomanChild Cécile performs exceptional interpretations of unknown and scarcely recorded jazz and blues compositions that are dated back to the 1930s-1940s — songs written long before she was born. She explains why she has such a deep affinity for such artists as Empress of the Blues, Bessie Smith: “There is something so mysterious and beautiful about Bessie Smith’s music. Here is a Black woman who lived in the most racist period in American history, but was able to have a successful singing career while carrying the stigma society placed on her for being born Black. And through all that she went through she remained a proud Black woman and performer to the very end.”

Cécile readily admits that Bessie Smith’s music seemingly had grown in importance to her as she pursued studying and performing her compositions, “…and no one comes close to challenging Smith’s supremacy as Empress of the Blues,” confesses McLorin Salvant. But you can hear a lot of one of the influential pioneers of the modern jazz vocal form, the Ethel Waters (Waters did not invent the modern jazz vocal form, but she perfected it and inspired many generations of jazz singers to follow her technique) style in McLorin Salvant’s John Henry track. According to the lore and the song, John Henry was a steel-driver, meaning it was his job to make the tunnels through mountains for railroad tracks. As the story has it, Henry was challenged to a workers’ duel – his hammer versus a giant steam drill. Henry supposedly beat the drill, only to die on the job “with his hammer in his hand.”

The earliest John Henry ballads originated in the oral tradition of hammer songs in the 1870s and evolved over time into the ballads with which we are familiar today. One of the earliest written copies of the ballad prepared by a W. T. Blankenship and published about 1900 or slightly earlier.

With this backdrop and history in mind, Cécile’s delivery of John Henry is strapping, direct and to the point – her rhythm style is so basic and fundamental that she rarely need to rely on the rhythm section (Aaron Diehl, piano, Rodney Whitaker, double bass, Herlin Riley, drums, and James Chirillo, guitar, banjo). Like another great stylist of the 1950s and 1960s, Anita O’Day, Cécile likes to delve into the elegant examination of the lyrical content of a song like John Henry, in which piece-by-piece she successfully breaks down the harmonic variations and leads us on an audacious rhythmic train ride!

Cécile sings with more emphasis on thoughtful interpretation and sensitive shading, and for this she has blossomed into a much more compelling singer as a result. Her declamatory manner of projecting lyrics is slow and filled out giving coloring to the lyrics as she admirably demonstrated in I Didn’t Know What Time It Was track, which is a popular song written by Richard Rodgers and the lyrics by Lorenz Hart for the musical Too Many Girls (1939). Cécile is intensely drawn into the song rather than gazing unperturbedly from a distance. She opened herself up, made herself vulnerable, and in the process is transformed into a singer who can get into the emotional depths of the song. McLorin Salvant used her habit of seizing the words of a lyric, very deliberately, one by one. Instead of throwing the lyrics away as if they are meaningless, she nurtured them and found the colors in them.

Cécile reflected on what she wants most in the coming years ahead which is to “improve and mature as a singer and to write more creative and visionary compositions for myself and other musicians.”

Near the conclusion of my conversation with Cécile, I noticed that at no time did this humble, intelligent and gifted young artist ever mentioned anything about being the next Sarah Vaughan or Bessie Smith. Instead Cécile embraces the fact that she is a jazz singer and most music critics view her as a jazz and blues singer foremost.

Cécile McLorin Salvant is a song stylist who just so happens to be a genius at singing good and simple music, tunes that has good range and good lyrics regardless what anybody calls it. Her job is to take good material and deliver it like an actress who immerse into the role of a complex character. And in WomanChild – Cécile McLorin Salvant delivers an endearing performance.